"The Biggest Animal" was first recorded as a solo track by Rivers Cuomo in January of 1991[1]. This recording was included on Cuomo's cassette tape demo The Yeastmaster, which compiled demos from 1990 to 1992. The song would be demoed twice more in 1991, once in February and once in March, both times by Fuzz as a full band. This included Patrick Wilson on drums and Scottie Chapman on bass.

Though Fuzz would not last through 1991, "The Biggest Animal" would survive for a short while longer in Weezer's early live sets. During a May 1992 show at the 8121 Club in West Hollywood, Rivers Cuomo would give a nod to Fuzz by introducing the song as being "by one of our favorite bands."[2].

Jason Cropper jokingly referenced the song during a Weezer rehearsal in June 1992, soliciting groans and laughs from the rest of the band when suggested they should practice it.[3].

Cuomo included the song on "The 4 and 5 Star Demos of Rivers Cuomo," a list compiling demos he deems of high quality that he released in July 2008. 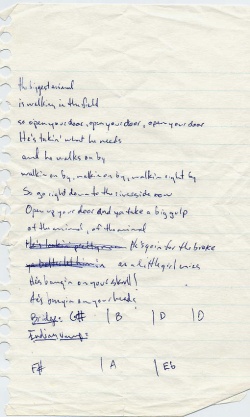 Handwritten lyrics for "The Biggest Animal"

So go right down to the riverside now
Open up your door and ya take a big gulp
of the animal, of the animal

He's going for the broke
as a little girl cries