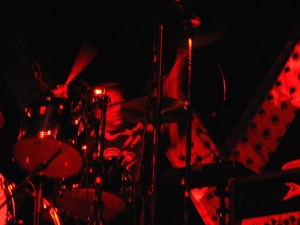 On May 3, 2005 Weezer performed in Minneapolis, MN at First Avenue on their tour in support of Make Believe. The opening Act was Ringside.

...Minneapolis: Weezer has played First Avenue many times since they first visited in '94, and their shows there are always a blast. The guys tried something new in tonights set, with Brian singing the lead vocals on 'Getchoo'. Brian did a great job! The whole set was thick n meaty, and inspired many very loud sing alongs from the audience. Tonights show ended with an extended feedback jamb, the first like it this tour.

After having quizzed the first person in line waiting to get in to the show for the last 4 shows, I can report that the average time spent waiting in line by the people who are first in line is 7 hours. Whoah. Spotted not too far from the front of the line was an original 1994 weezer 'Bokkus' t-shirt (yellow with black printing, AKA the 'Charlie Brown' edition), in really nice shape! If I were that guy I'd treat that shirt well, they dont make 'em like that anymore!

Tonights show was visited by our previous production manager Graham ('the grim reaper'), who stopped by to bellow some Shakespearian rantings for old times sake. Also in attendance was Steve C., one of the 3 original 'RWA' webmasters back in '95! Also, the "Make Believe Mobile' (AKA the blinged out weez SUV from out of nowhere) surfaced again outside the club tonight. That thing gets around!