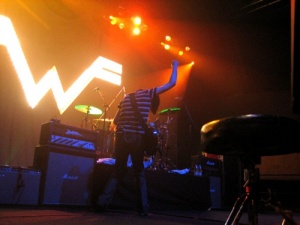 On May 11, 2005 Weezer performed in New York, NY at the Roseland Ballroom on their tour in support of Make Believe. The opening act was Ringside.

...gotta say, its good to be back in the big apple! Over the years, Weezer has played everything from CBGB's to Madison Square Garden, and every visit is cool in its own way. This time brings the band back to what might be the all time coolest venue in the city, for its overall combo of history, medium-small size, good sound, and neat character - The Roseland Ballroom. The Roseland has seen it all over the years, from its origins as a real ballroom back in the old big band days to its present rock legacy, and has shrugged off numerous threats to its existance from an ever changing city. It may be 'small' for a band like weezer, but it feels like a perfect fit.

no reports of roughnecks stirring up trouble tonight, and a slightly less raucous crowd than at recent shows (its the 'NYC cool' factor at work, i think), but they were still plenty loud with the singalongs and some crowdsurfing to boot. A big whassup to 'dorkamania', and various friends and family who came out to see the guys rock, including a band member's mom! Always a special night when there's a weez mom in the house.

I just got back from being front row of weezer NYC, and what an awesome show! The guys sounded great, and each song was an incredible recapitulation of their best. Congratulations, weezer, on a great new album and shows equally as rocking. One reason why they put on such good shows is because you can tell those guys are into it, and believe in the music they're playing. I'm prouder than ever to be a weezer fan. ---Emy P.

The show was great. My friends and I fought our way up to the front. We got jostled around a lot and there was a guy who kept trying to rest his elbow on my head, but it was worth it to see Rivers up close during the solo of Hold Me and Haunt You Every Day, and Scott pullin' all his rock god poses. I'm going to be there for the 5/12 show too. I'm hoping maybe the guys will switch it up a little bit for the second night in town.. ---Will