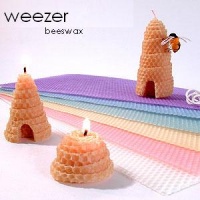 Beeswax is the name of a fictitious Weezer album that was the subject of an online joke.

Back in 1999, during the band's first hiatus, a group of posters on alt.music.weezer developed a fictitious tracklist for a hypothetical third album, Beeswax. The Beeswax legend was further expanded and exaggerated by Weezer Nation board member Pony Eyelashes~. From the original posting: