Simpleton a fictitious fourth Weezer album created by Weezer fans as a prank. The prank happened in 2003 on Weezer message boards online.

Simpleton was created as a mock "sequel" to Pinkerton. Just as The Green Album was seen as a stylistic follow-up to the The Blue Album, it only made sense that Maladroit's follow-up, Simpleton, was to be similar to Weezer's sophomore album, complete with album art from a Japanese painting and a similar name.

As an April Fools joke, Simpleton's release was 'scheduled' for April 1, 2003. Photos of the album in a box with The White Stripes' "Elephant" were used to further the ruse, claimed to have been delivered to a record store in such fashion.

The title, Simpleton, was chosen for two reasons. Firstly, the word simpleton is very similar to Pinkerton, both having nine letters and ending in "ton." Secondly, simpleton literally means "fool", which was a way of foreshadowing the joke's true nature.

An earlier fictitious album was Beeswax, developed by fans on alt.music.weezer during Weezer's hiatus in 1999.

In 2006, members of a Weezer online message board community produced and recorded original songs based on the fake song titles that appeared on the Simpleton packaging. 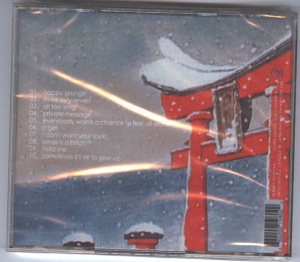 The back cover revealed the fictitious track listing.