Posted on Weezer's official Facebook page as part of the "Today in Weezer history" series on January 6, 2014.

Today in Weezer History: 1/6/2000 - On this day in 2000, the very first online "Karl's Corner" post was put up, on weezer.net (AKA RWA, AKA Rebel Weezer Alliance). (the post: "01/06/00 - greetings - This battlestation is now operational. Well, kind of.") Up until this point, @karlophone's contributions to spreading the word to the fans had been limited to his "karls corner" articles in the Weezines of the Weezer Fan Club, which Karl had kept going for 4 more issues since the tragic deaths of fanclub founders Mykel and Carli in 1997. But with the internet finally taking over after a 6 year slow rise, and a friendship between Karl and Anuj and Dan who were running the largest weezer fan website, weezer.net, it seemed to make a lot of sense for Karls "Corner" to become an ongoing news blog on weezer.com. Weezer.net had grown fast in '95 to become the place to be, with video clips ripped fom TV well before youtube existed, and exclusive band info direct from Mykel and Carli (and sometimes Karl) to Anuj and Dan. Of course the present day rise of Twitter, Facebook, and Instagram made it ever easier to get news and images out to the peeps fast, but the foundation remains weezer.com, which went from ".net" to ".com" in early 2001 (after convincing some random guy who was sitting on the domain name to let it go). By that point weezer owned the site, and by 2002 Anuj and Dan bowed out as grown up life took over.

The online history of weezer fandom is a deep subject and will be covered in a future article and/or book, but it dates back to 1994 on the old EFNET servers on IRC, where fans would link up and chat/fileshare online live (over phone line modems). The channel creator and moderator, Anuj, later went on to start weezer.net in late '94. There were also the more primitive BBS bulletin boards, and the alt.music.weezer newsgroup which arose in the mid 90s (the first mention of weezer on Usenet was a 2/19/94 mention in a list of upcoming shows in L.A. on alt.music.alternative). Meanwhile Mykel and Carli had an email list of the people in the fan club and would send out mass emails to alert people of important news.

Pictured here are some early website images: The 'fallen AT-AT' of the original RWA splashpage, the later RWA splashpage and homepages, the original Karl's Corner banner, and the photo that the banner was made from, shot in 1999 (by Steve, an original contributor to RWA) at a Special Goodness show in Minneapolis' First Avenue club, as Karl counted the ducats. 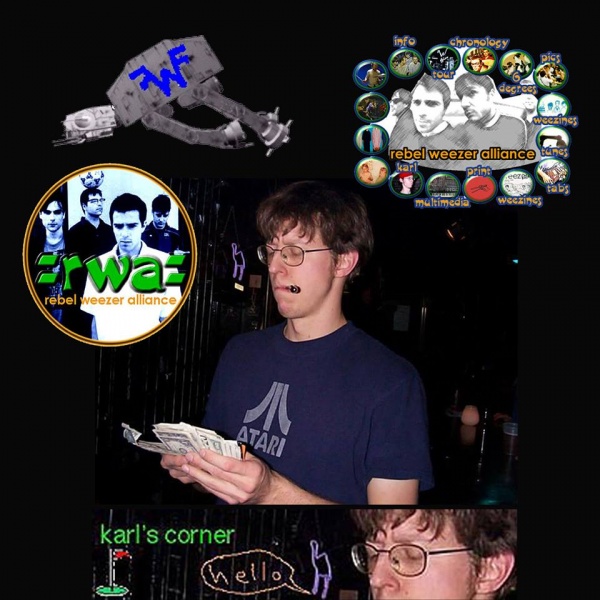