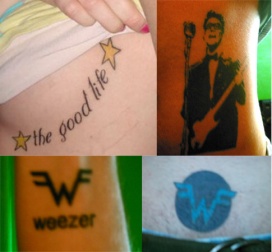 *update 5/5*: Brian Bell's "The Relationship" MySpace page is now fully decked out with songs, including "Hand To Hold", which Weezer fans may recognize as a partial descendant of the '02 Weezer demo "Private Message".

..."El Scorcho" made this new Rolling Stone list (...instead of the perhaps more obvious choice of 'Hash Pipe'...??)

...'Suzanne' (the monkey with vague connections to the Weezer song of the same name used in the soundtrack) of Jay And Silent Bob Strike Back made #8 in theshiznit.co.uk's "Top 10 Movie Monkeys" list.

...See! a University of Oklahoma brass quintet (complete with wicked distortion pedal on trumpet!) play a cool piece inspired by 'Perfect Situation'. It ain't rock, but it kinda rocks! The piece is by Lauren S. of the U of O.

...And here's a cool usage of 'Perfect Situation' itself, recommended watching for all video game fans: "My childhood in 4 minutes" (hat tip: Fabio from Brazil)

...some interviews from a few months back in case you missed 'em: Patrick Wilson; Me.

...just a clue folks: most weezer autographs on ebay are fakes. Like these ones. (its not too hard to tell in this case, as Matt certainly didnt play a weezer show in 2005!) If you are ever unsure of the authenticity of a Weezer autograph, email me, I can usually tell what's what.

...its somewhere between a remix and a cover, and its all about the wicked techno style: Check out the track called "Addiction" on this MySpace page.

...I think this is old, but its still available and aside from some weird out of tune moments, its fun: Weezer/50 Cent mashup linked to from this blog. (hat tip: Alex #175)

* long time Weezer cover band workhorse El Scorcho is coming back soon with new gigs. Theyve even got a Podcast going now. They next play 'Andrew's Upstairs' on May 25.

* interesting a capella cover of 'Island in the Sun' at this MySpace Music page.

* a neat 'El Scorcho' with real cello can be heard here.

* Happysad from Poland covers Undone live (in Polish!) here. I kinda dig the solo part with the break down drum style.

...random weez reference in pop culture alert: In the book "Fat Kid Rules The World":
"...“What groups do you like, T?”
I silently curse at the use of the nicknaaame. Damn him. The question seems totally unprompted, as if he’s jusst thinking out loud, wondering what I like. No harm in that, right?
I pause. “Well…I…” Now I’m flustered.
Curt looks up. “Don’t you know what you like?” His face is contorted with disbelief and he looks like a ferret agaain. “You said you liked the Smack Metal Puppets, right?”
I blush furiously. I do, but there’s something embarrassing about admitting it. Fat kids ought to be into groups that are kind of funny, right? Weezer? They Might Be Giants?..."
(hat tip: Weerez.com)

...note - Weez budrows (and budress) Ozma are releasing a new album in a few short weeks. It fully rocks hellfire. Check it.