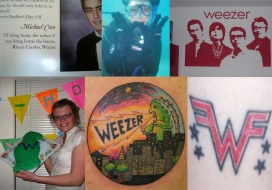 *update 6/5* Hey, folks. Weezy old schoolers know of the Rentals, fronted by original Weezer member Matt. Well, there be fresh stirrings in the Rentals world, and now is the time: First of all, theres a big US Rentals tour coming up, and the tickets are on a special discounted pre-sale till the 16th. See therentals.com for the scoop. Also while there, you can enter contests and even pre-order the new Rentals EP "The Last Little Life", which comes out this summer. Matt and co. have some great stuff cooked up for the summer, so don't be napping!

...howdy folks. Spring hath sprang. The meadows are teeming with life. But what of lake Weez? Looks quiet. Too quiet. Is it true what they say about how still waters run deep?

...So, just what IS this all about? I honestly haven't a clue.

...It started as a rumor, but it's been confirmed: "My Name Is Jonas" is one of the tracks in the latest greatest version of "Guitar Hero", Guitar Hero 3 for PlayStation 2, PlayStation 3, Xbox 360 and Wii. Its coming out this fall. Get your thumbs ready for some overdriven fingerpickin'! (...but whats up with calling Foghat "Fog Hat"? Little whippersnappers...dont know they classic rock.. grumble grumble..)

.."Beverly Hills" received (some sort of) award at the 2007 BMI Pop Awards. These annual awards "recognize the writers and publishers of the past year’s 50 most performed pop songs from BMI’s catalog of more than 6.5 million compositions.” One would think that this would apply to 2005 not 2006, but so it goes.

...The DVD of Season 2 of the Muppet Show is out on 8/7, and one of the bonus features is "Weezer and The Muppets". The press release says its "More than just [The 'Keep Fishin'] video, see this fun, somewhat new entry into The Muppet Show annals." Maybe they mean the "Gone Fishin'" 4 part behind the scenes thing?

...Rivers has been named as a "potential inductee" for a proposed Connecticut music hall of fame.
(above news trifecta: hat tip hat trick to 'eagle eye' of weerez.com)

...whatever happened to alternative radio? As things shift into the ever more homogenous 'top 40' world, most popular radio formats have been getting mashed together. These days, bands from Nirvana to Coldplay are going up against Fergie and such, or getting mushed into what passes for "Classic Rock" these days. The heyday of "Modern Rock" seems to have been about 1992 - 2000. Where are the indie stations with an identity? Why cant every city support a killer station like Indie 103?
This story is now all too familiar: "...recently Minnesota's Alt Rock station, Drive 105, went off the air and/or switched formats to the extremely cheesey, extremely dissapointing Love 105...the last song the station played was "Say It Ain't So" by Weezer..."
Petition to bring back Drive 105 here. (hat tip :Steve G.)

...and while yer at it: Save Net Radio! Recent FCC rules changes will all but wipe out most online radio stations and force the few that remain to get all homogenous and boring like most regular stations have gotten. Its like how the Jedi were wiped out. Not cool. Read up and help out if you can...
...thanks to myspace, long live the late great That Dog. Get familiar if ya ain't. This band came up in L.A. at the exact same time as the weez and were a big inspiration to them.

...Dan at Goodrock.com is the same Dan who helped run the original Weezer.net - Check out his wicked online rock shop and taste the rainbow of super fair priced band T's and merch!

...making your own video for a weezer song is not new, but it seems to be happening more these days. Budding directors, what you got? Heres Nishant's ALF-ridden "This Is Such A Pity".

...apologies to Fullerton's Hot Panda, for whom I meant to post info on their all blue album cover show last Friday, but I missed the date. Maybe theyll do it again..