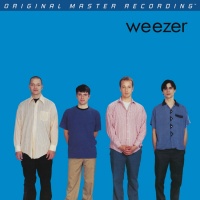 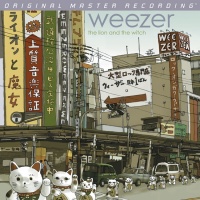 ...folks, those of you who like to hear their weezer on 12" platters of vinyl, there is reason for celebration. Mobile Fidelity Sound Labs have started a Weezer series of 180 gram reissue LP's. The first 2 releases are coming out on September 18th and they are the Blue Album and the Lion And The Witch EP - which has never been on vinyl before! Both are limited numbered editions, with the lion And the Witch limited to 3000 copies. MFSL will ultimately be releasing all of the early albums up to and including Make Believe, on glorious 180 gram vinyl, remastered specifically for vinyl and pressed at the best pressing facility in the world, RTI.

The guys at MoFi have been working closely with us to make sure these are the finest possible pressings. They are consulting with the band and myself (a confessed vinyl fanatic and audiophile) going over every detail. I have personally listened to and approved the test pressings of the first 2 releases and will continue to do so as new editions are prepared.

When I listened to the Blue Album test pressing, I noted that it definitely sounds better than the previous best Blue vinyl pressing which was the original 1994 UK one. This new one is better balanced than the original, theres more clarity in the midrange for sure. Its easier to hear the little details and sounds and such, and the bass is better defined. You can distinctly hear the various cymbals even when they are crashing together at the same time. The original just feels a little squished by comparison. Its also noticably better then any of the CD editions of the album. Meanwhile the Lion And the Witch EP sounds better then the original CD for sure, clean and full. The live recording was decent for 2002, but its minor limitations arent noticable like they were on CD. Its as good as I think it can get.

Click Here for the Blue Album MusicDirect page with more detail, including pre-order links and info.

Click Here for The Lion And the Witch MusicDirect page with more de... including pre-order links and info.

Everyone that attends the show will have a chance to win a ticket to the Charm City Festival ft. Weezer in Baltimore, MD on September 15th! Click here for info.

...And speaking of the Blue Album, here's some "Amazing Things you Didnt know About The Blue Album".