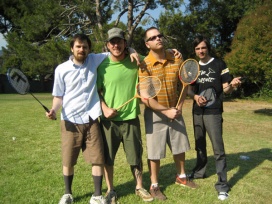 ...Looks like were in a full blown good ol' "Weezer Hiatus" folks. The rest of '06 will likely be quiet as far as full band activity. Except for badminton matches, of course. But as 'partial band' or 'solo' things come to light, we'll post em here, along with any definite word that we get about whats to come. In the run down of possible new weezer stuff, heres how its looking...
...'Holiday Treat'? - *update* should be up as of 10/2. (Still working on "Weezer Scrapbook '05 Vol 2" as well.)
...Live DVD? Was apparently edited, but has been put on hold for now.
...Greatest Hits Album? If it happens, it will definitely have some new tracks. No new studio work done at this time though. VERY Very cool cover art created.
...New Weezer studio album? Wish I had news. Rivers says hes written a lot of songs and plans on continuing to do so, so theres that.
..."Factory Girl" film and soundtrack release? The film is now in post-production according to its official website. Every movie site that mentions the film claims that its release date is set for "2006", but theres nothing more specific, so we can only guess it will be out by the holidays. (This is the recently made film in which Brian and Pat played the parts of Lou Reed and John Cale (of the Velvet Underground), and recorded a cover of the VU's "Heroin" for the movie and soundtrack)

...been getting some questions about Brian these days: "What's The Relationship? What happened to the Space Twins?" Well, you need to update yourself by reading Brians Fan Interview (note - this link may not be live till Monday 9/25). And The Relationship is his new other band - check the MySpace Music page for music and info on that. Ive heard the whole album and its excellent. All kinds of cool musicians helped Brian out with it, like Luther Russell and Sean Lennon. Hopefully Brian will get this thang out into the world shortly.

...The issue of meditation-mag Tricycle with the excellent Rivers interview is now on select newsstands - I saw it at Borders the other day. Actually, Rivers has his first 30 day meditation course coming up. Wish him good vibes for a successful course - A 30 day Vipassana course is some serious business.

...The September issue of Alternative Press had a cool article on Pinkerton (looking back TEN years later - wow), including comment from then-weez bass player (and current Rentals leader) Matt Sharp. However, that issue has already been swept aside by the (Pinkerton-less) October issue, so if you missed it, heres a nice scan from a fan. And Pinkerton fans in the Toronto, Canada area: see the original artwork used for the cover of Pinkerton (master Japanese printmaker Hiroshige's "Kambara: Night Snow"), now on display at the Royal Ontario Museum. (hat tip: Michael from Buffalo)

...*update* An unexpected but cool special offer from of all places, Wal-Mart. Some locations are now offering the Blue Album for $9.72, and the price includes an iron on t-shirt decal of the cover of the Blue Album! (Hat tip to 'Brandon from NY' who says "I tried [the iron-on] and it came out great!")

...random discography note - The Blue Album track "Holiday" appears on the soundtrack to the new goofball movie "Accepted". (Anyone know if its aacttually heard in the film?) (*update*: emails have come in from weez moviegoers, it does appear in the film. Also, a fan review: "The movie is not very fun." Thanks folks!)

...*update* additional discography note: Weird Al Yankovic's new album "Straight Outta Lynwood" contains (amongst some very funny tracks including "White And Nerdy") a polka medley that includes "Beverly Hills". This I believe is the first released Weird Al treatment of a weezer track. (The original version of his "Alterna-polka" medley in '95 or '96 did include a 'Buddy Holly' section, which didnt make the album due to Rivers being unsure if it was funny or not, and being reluctant to allow it if it wasn't clearly funny.)

...fans of the (US version of) The Office, check out this "Jim/Pam" video, set to "Perfect Situation". (hat tips: Stephanie M., Brian A.)

...and finally, this is quite late, but needs to be noted on weezer.com news: Jack Smith, who you see in beginning of the "Buddy Holly" video as the "You Wanted To See It" announcer, has died at the age of 92. Jack Smith was in real life the host of a TV show back in the 50's called "You Asked for It." Later in the 70's, he appeared in a Happy Days episode, playing a version of his own self as he was back in the 50's. And that episode of 'Happy Days' was one of the ones that director Spike Jonze used to craft the "Buddy Holly" video back in 1994. So Jack sort of got sampled twice over, from the 50s to the 70s to the 90s. (Kinda post-modern when you think of it!) Anyway, he's left us now, "gone to the big fried chicken stand in the sky" as weezfan Jim sez.