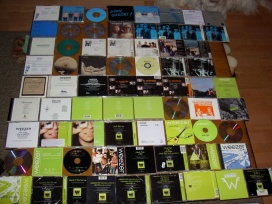 *UPDATE 12/25* this x-mas, take a moment to thank James Brown (R.I.P.) for singlehandedly inventing most of modern music and for being one of the coolest cats ever.

...Happy Holidays to all - Merry Christmas, Happy Chanukkah, Happy Kwanzaa, and all that mess. Things in the weez world have been real quiet for most of '06, but as we look forward to the new year, it could be a whole new ball game. We just don't know when the game starts...but hold on to your season tickets!

...Rivers sent in his list of his "Stuff I Liked in 2006" to his alma mater's newspaper, The Harvard Crimson. For those looking for a Rivers 'stoke factor' list in vain, this is about as close as youre gonna come! Check it out here (scroll down past the list by Larry Summers).

...Happy belated birthday to Brian Bell (12/9)! Brian's been keeping busy and had a rather cool early birthday present when he accompanied his friends in the band Ringside on their tour to Russia a few weeks back. Brian (first Weezer member in Russia!) says Moscow was super cool, the shows went great (Brian lends his guitar and backing vocal skillz when he sits in with Ringside), and that the Beatles werent lying when they sang about the fine girls "back in the U.S.S.R."!

...over at JONAS, theyre fighting the good fight, and building a weezy street team community out of motivated weezer fans. When the weezer winds shift into action, they'll be ready. Join them! You'll like it. Plus they have a super cool splash page.

...If you were a weezer.com follower back in '01, and/or have the Maladroit CD, you know what the Cobo Challenge is. Now it looks like Detroit's historic (and very skateboard friendly) Cobo Arena is slated for radical re-engineering or demolition, which would forever alter/destroy those smooth slanted hallways. A sad day for skateboarding, and rock history!

...Rolling Stone readers spotted a weezer recommendation previously only known to avid bootleg collectors (in the issue with Snoop on the cover). The 7/11/02 Tinley Park show, which I had no idea was making the rounds enough to be noticed by a RS staffer, got into their "Download Now" section. I'll admit the show is quite good (though some versions have some digital noise on the later tracks), but as for where one is supposed to "download it now", who knows.

...tribute band alert!! The Little Bitches (of San Francisco) are playing on Jan 5, 2007 at Slim's in SF, opening for Zoo Station (U2 tribute) and This Charming Band (Smiths tribute). More L.B's. info and mp3s etc here and here.

...todays photo: (some of) the insane weezer cd collection of Jordan P. Jordan sez: "I have about 113 weezer cd's. Notably the Canadian My Name is Jonas, French Hash Pipe, and Swedish The Good Life. I also came across two rare Buddy Holly's, the Buddy Holly Spain promo and the BH Italian. There's only a few weezer cd's I don't have."

...on a final note, I'd like to thank everyone for sticking with both the band and the site thru a quiet 2006. It can be frustrating to be a weezer fan sometimes, and your patience and and understanding have been appreciated. As far as the site goes, a big reason many of the promised/planned site upgrades and additions have stalled is because the Geffen/Universal tech team has been planning a major server/system swap that will include big changes and improvements in the tools I (and all the webmasters who use the Geffen/Universal system) have to use. They originally told me it would be happening early in '06, but apparently the project ballooned and I was told to chill on big changes, as everything would just have to be re-done anyway once the new system was in place. (incidentally, this tech stuff is the reason the recent media page addition took 3 extra weeks to go up - I do apologize, I was only repeating what I was told when I said "next week", and it turned out to be a lot later)

So the bad news was a lot of parts of the site have gone from stale to rank (like the equipment history, etc), but the good news is I was asked for a 'wish list' of wanted/needed features, and I shot for the moon, including such things as true messageboards to complement the comment-based system we currently have, as well as a ton of other stuff that both you and I have wanted since the last 'big switch' happened in early '05. Im told that I will be getting the inside scoop on the new dealie in January, and that I should be happily suprised with whats to come. Its always been my intention to pass along as much good weezer stuff as i am allowed to, so Im excited about the new system 'cuz it will help me do just that. Now let's wait and see what the band comes up with on the music end o' thangs. Happy Holidays and a Happy New Year to all.