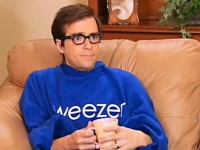 Rivers Cuomo wearing a Weezer Snuggie
The Weezer Snuggie (or Wuggie) was a Weezer-branded Snuggie®, a type of sleeved-blanket sold by Allstar that gained popularity in the late 2000s. It was released in 2009 to promote the band's album, Raditude, and was released in three colors: "Royal Blue", "Sage Green", and burgundy. 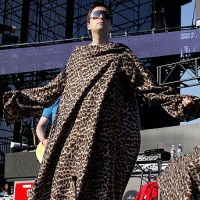 Rivers Cuomo wearing a leopard-printed Snuggie® at the KROQ Weenie Roast in Irvine, California, on May 16, 2009.
The Weezer Snuggie's existence was first mentioned on May 16, 2009 at a concert in Irvine, California. Said Rivers Cuomo[1], "A Wuggie is basically exactly like a Snuggie, except it says Weezer on it. The people at Snuggie are doing it with us and promoting it with us. It’s a totally legit Snuggie." He is also quoted as saying, "it's hard to understand the appeal of this product." In explaining the promotion to NPR in November of 2009, Rivers Cuomo said, "Well, like Weezer, Snuggies are just this weird, cool product that everyone seems to like. They're really popular, and you can't really figure out why. So we figured it's a good match."

To promote the product, the members of Weezer starred in a variation of the original Snuggie® commercial. The Weezer Snuggie was sold with a CD copy of Raditude as a bonus. It was available through phone-order and on weezer.com.

To promote Raditude and the Weezer Snuggie, Weezer performed on the Late Show with David Letterman while wearing Weezer Snuggies.

Alternative rock band Weezer and Allstar Products Group, marketer and distributor of the Snuggie, America’s favorite “blanket with sleeves,” have joined forces to create the official Weezer Snuggie. It will be launched today and will bear the band’s trademark “Weezer” logo. This latest addition to the Snuggie collection will allow fans of the band to stay warm while keeping their hands free to rock out. And rock out they will; fans who purchase a Weezer Snuggie blanket will also receive a copy of the band’s brand-new album, Raditude, as a bonus gift.