From Weezerpedia
(Redirected from Alone series)
Jump to: navigation, search 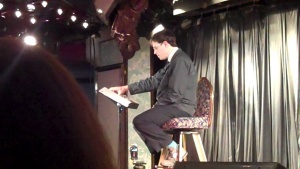 Rivers Cuomo on the first Weezer Cruise, reading from The Pinkerton Diaries, which were released alongside Alone III.

The Alone series is a multiple-release collection of demos by Rivers Cuomo.

The first release was Alone: The Home Recordings of Rivers Cuomo in 2007, followed by Alone II: The Home Recordings of Rivers Cuomo in 2008. Both discs contains detailed liner notes written by Cuomo about the creation of each song. A few days after the release of Alone II, Cuomo organized a hootenanny at Fingerprints Records in Long Beach, California wherein Cuomo performed vocals for songs accompanied by fans playing instruments. This performance was released to independent record stores the following year as Not Alone: Rivers Cuomo & Friends Live at Fingerprints in both CD and DVD formats. A third installment in the Alone series, Alone III: The Pinkerton Years, appeared as a pack-in CD with the book The Pinkerton Diaries which documents Cuomo's life from the release of The Blue Album through the end of the release cycle for Pinkerton and includes photographs, essays, and journal entries from that period.

In a USTREAM chat on September 5, 2010 and again in an interview with SPIN, Cuomo hinted that an Alone IV, V and VI would be released in the future, with Alone IV and V containing more of Cuomo's original demos while Alone VI would be cover songs.[1] In the same SPIN article, Cuomo stated that Alone VI would “just be Rivers songs”.[1] Cuomo later told fans that Alone VI would consist solely of cover songs. According to fans who attended Nerd Night around 2013 or 2014, Alone IV was, at the time, considered as a compilation of demos for already-released Weezer songs [2] These installments ultimately never materialized, however. In a 2017 interview, Cuomo expressed regret over releasing the existing Alone albums, telling Dazed, "I wish I hadn’t, but I did. It’s kind of embarrassing. If you search for my name on Spotify, that’s what comes up. I should put out something more pro also so people don’t think that’s all I do."[3]

In 2019, Cuomo described his more recent writing process as utilizing demos as far back as the early 90s, telling Alternative Nation, "The way I write now, I have a folder of about 1,400 demos. And I look at it through a program called Mp3tag. I’ll be writing a song, and I’ll know: “All right, I need a bridge that’s at 132 bpm, in the Key of A-flat major, and the bridge needs to start on the two chord, and the melody needs to be on the fourth degree of the scale.” I press “Go,” and Mp3tag returns the ten matching demos I have."[4]

In an August 2020 Riverpedia entry, Cuomo confirmed that he had no plans to continue the Alone series, instead preferring to keep recordings to himself in order to appropriate them for future Weezer songs. Cuomo apparently reversed this decision shortly thereafter, however, launching a demo storefront on riverscuomo.com in October of that year, selling hundreds of demos to individual users on November 11, and selling a compilation titled Alone IV: The EWBAITE Years on November 20. Later, many more bundles were available in the store. Some (including The EWBAITE Years) were later designated to a different Alone number.

geewiz: Rivers, would you mind elucidating your mind frame right now? In the recent past you've kept these close to your chest. Why so open now?

Rivers: Geewiz, good question. it might be as simple as: because i was able to code the market, we now have a way to make a fair, direct, simple and efficient exchange. also, we've developed a community around the market that is a good match for the demos. it's not like i'm going on good morning america trying to sell 10 lo-fi version of an obscure 20-year-old song to people who aren't even huge music fans.

* Raditude-Hurley were originally their own bundle.