Avant Garde (later known as Zoom) was a progressive heavy metal band from Connecticut. Featuring technical and heavy guitar solos, a dramatic production sense, and hair metal aesthetics, the band was formed by Rivers Cuomo and Justin Fisher with other students from E.O. Smith and Rockville High School. Drawing inspiration from Judas Priest and Kiss, Avant Garde consisted of Cuomo on guitar, Fisher on bass, Kevin Ridel on lead vocals, his brother Eric Ridel on guitar (later replaced by Michael Stanton), and Bryn Mutch on drums. The band relocated to Los Angeles from Connecticut in 1988, changed its name to Zoom[1], and dissolved by the spring of 1990.[2]

Rivers Cuomo and friend Justin Fisher performed in several bands throughout the 1980s, playing covers of songs by bands such as Kiss, Metallica, Yngwie Malmsteen[3], and Fates Warning[4], with Cuomo even taking guitar lessons from Fates Warning guitarist Jim Matheos.[5] Eventually, the two formed a band they dubbed "Avant Garde," after Cuomo saw it in an airline magazine.[6] (though Cuomo would remark years later "[they] were anything but.")[7][8] Cuomo and Fisher recruited fellow E.O. Smith attendee on drums, as well as brothers Kevin and Eric Ridel (of nearby Rockville High School) on lead vocals and guitar, respectively, after meeting Kevin Ridel at a "Battle of the Bands" competition.[4]

Avant Garde was very devoted to technical proficiency, rehearsing four or times a week for several hours at a time and shunning partying and drug-use, a policy which led to the ousting of party-goer Eric Ridel after a year.[4] Said Fisher:

Rehearsals typically took place at either Fisher's house, Cuomo's house or "The Band Room," described by Fisher as "a small, burnt-out furniture factory in Vernon. There was absolutely no adult supervision and bands like ours would just go in there and rent our own piece of the floor for three or four hundred dollars a month and build our own walls. We'd practice in there, and kids would just go in there and hang out and listen to other bands. It was really kind of neat and scary at the same time. It was incredibly cold in the winter... We were all in high school. Looking back, I don't know how the hell we came up with the rent — it was insane!"[4]

Reflecting on the band in 1996, Kevin Ridel said, "[Avant Garde] just kind of sucked... We were trying to be kings of our instruments and just disregarded the idea of writing good songs. We were striving for technical prowess, but we still couldn't really play."[8] 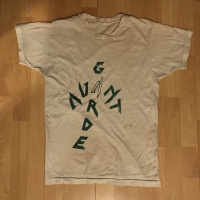 In the summer of 1987, Cuomo attended a summer program at Berklee College of Music in Boston, Massachusetts, where he met Texas native Michael Stanton. Cuomo and Stanton quickly became friends and spent hours composing dual guitar solos.[4] After the program at Berklee concluded, Stanton traveled with Cuomo and Fisher back to Connecticut, where Stanton stayed at Cuomo's house, before sitting in with Avant Garde at a performance in Massachusetts.

On December 12, 13 and 18 of 1987, Avant Garde recorded their first demo tape at Trod Nossel studios in Wallingford, Connecticut[9][1], later dubbed The Blue Demo for its light blue sticker label, consisting of the songs "Tongue of Fire", "I Must Be Dreaming" and "Black Rose." The band returned to Trod Nossel in July of 1988 to record a second demo, later dubbed The Purple Demo for its purple label. Fewer than fifty cassette copies are believed to have been produced.[1] In a matter of weeks, the demo received heavy rotation on WHUS 91.7, University of Connecticut's campus radio station, appearing in the #11 slot (above Jane's Addiction's debut).[4] Avant Garde would go on to headline shows throughout 1988. That same year, Michael Stanton relocated from Texas to Connecticut to join the band full time, replacing Eric Ridel.

Throughout January and February of 1989, the band recorded a third demo titled Somethin' Different!, featuring three new songs and three from The Purple Demo. The band planned to perform a concert in their hometown that winter, but on the night of the show, the band arrived at the venue to find it closed down due to a snowstorm[4] 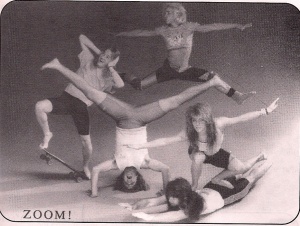 In early March, Avant Garde relocated to Los Angeles, moving into an apartment at 1825 Cherokee Ave. While in Los Angeles, the band found it difficult to find an audience or raise the hundreds of dollars required for "Pay for Play" concerts.[4] Later in 1989, the band changed their name to "Zoom," on the suggestion of attorney Randal Cohen.[6] In early 1990, the band recorded a new two-song demo. As the year went on, the band began to dissolve. Bryn Mutch left the band, leaving the band to search for a replacement drummer.[4] The band was evicted from their Cherokee apartment and eventually dissolved completely. 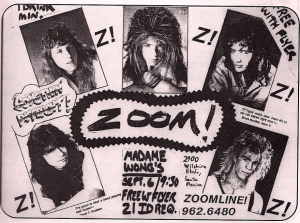