This show was organized and promoted by weezer, more specifically Matt, who booked the club and got the many bands to agree to play in a sort of mini-palooza of local LA groups. The Alligator Lounge was located on Pico Blvd on the West Side of L.A., not far from the "Amherst House".

The Show was touted as "The Big Crazy Show '92", And besides weezer, featured Joyride, Crux, Black Market Flowers, Missing Honey, El Magnifico, Boys Named Sue, Silvertrain, Fast Eddie Lee, and "DJ Cock". DJ Cock was what Matt decided to name Karl, who was appearing as the between-bands dj on the wheels of steel. Karl played a pretty eclectic mix ranging from Black Sabbath to the Pretenders to Superman storybook records. The crowd seemed to dig it. The biggest turntable hit of the night was probably "What's The Buzz?" from the Jesus Christ Superstar soundtrack. One funny incident occured when after the decidedly country-rock Boys Named Sue set was finished, Karl played "Im a little bit country" by Donnie and Marie Osmond. The guy from Boys Named Sue didnt have much of a sense of humor! In general, however, all the bands had a great time and the show was considered quite a sucess.

140px
there are no [known] photos from this show. flyer design by Matt/Kinko's.
[click on any photo for a larger size pop-up version]

side note: several days before this show, Rivers cut his long hair off.

Posted on Weezer's official Facebook page as part of the "Today in Weezer History" series on November 21, 2013.

Today in Weezer History: 11/21/1992 - Weezer plays "The Big Crazy Show" at the Alligator Lounge in West L.A. This show was set up and promoted by Matt Sharp who was the de facto show getter for Weezer in these days. Weezer lived around the corner from this club and there was a new booking guy there and somehow Matt got him excited about doing a big show with many current bands on the L.A. scene, even though only a few of them could really draw anyone. All the stops were pulled out and favors cashed in to get everyone to come play, and about 75 people ended up coming that night, which was quite good at the time. Other bands were Joyride (with Steve Soto, ex-Adolescents), Crux (later Skiploader), Black Market Flowers, Missing Honey, El Magnifico, Boys Named Sue, Silvertrain, Fast Eddie Lee (a Wax associate who occasionally played harmonica when weezer played "Jonas"), and "DJ Cock", who was actually Karl Koch on the turntables. Matt decided on that name and put it on the flyer, and Karl had to suck it up and deal. It was really his first DJ gig, and it went pretty well except when he played "I'm a Little Bit Country" by Donnie and Marie Osmond after the country tinged LA scenesters Boys Named Sue left the stage. The feathered cowboy hat longhaired leather jacketed lead singer got up in Karl's face and said "Don't you EVER do that AGAIN!" No sense of humor, those guys… 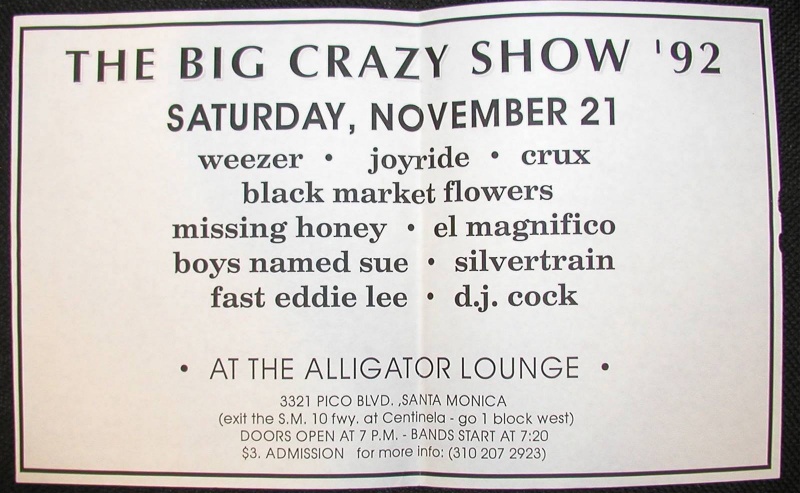