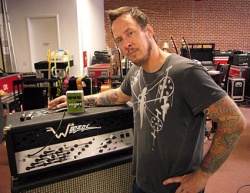 Scott Shriner's Equipment has gone through many changes over the years, this page exists to list in detail the equipment that's been used in the past and present. Much of this article is derived from the old Weezer Equipment History Page on Weezer.com and was originally written by Karl Koch.

In 2001 before the Midget Tour, Shriner got on board for touring, following the Inland Empire show. He joined in early August 2001, after a period of tryouts, and already had an established rig and bass selection, developed after several years in numerous local and touring bands. Shriner is a vintage Fender Precision Bass man, through and through. He has 2 old beauties, plus several new ones for back-ups. He loves the Ampeg SVT amp and 8x10 cabinet, both the vintage and the modern "classic" model. He has a vintage Ampeg head that he uses for recording, and adapted his setup to fit the Weezer way of running both an amp and a POD. He set his rig up on the side of the stage, "just so he could feel the stage move."

His set-up has, for the most part, remained similar to this, with some modifications made to cut down the overall size of the equipment load.