The End of the Game

"The End of the Game" is the third track and lead single from Van Weezer. It was released on September 10, 2019. 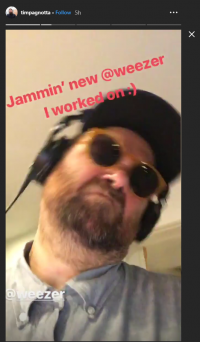 Tim Pagnotta's Instagram story from August 23, 2019, potentially in reference to "The End of the Game."

The lyric "All I want is to be wanted by you" suggests that "The End of the Game" may be the same song as (or, at least, appropriates elements from) the song "What I Want Is to Be Wanted", a track co-written by Rivers Cuomo and Tim Pagnotta in 2014, according to the ASCAP/BMI song database. On August 23, 2019, Pagnotta posted a selfie to his Instagram page with the caption "Jammin’ new @Weezer I worked on :)".[1]

On September 6, 2019, the song leaked onto the American television music service Music Choice. The song was officially unveiled, with its accompanying music video, alongside the official announcement of the Hella Mega Tour on September 10. Weezer performed the song live for the first time the same day at a secret show in West Hollywood. The song was performed on Jimmy Kimmel Live! the following day, on September 11.

During an Island in the Zoom webinar on May 2, Cuomo and producer Suzy Shinn mentioned that they went through several iterations of names for the love interest. They even considered Jimmy, but felt that it would be one too many Weezer references for the song.

"The End of the Game" was initially listed as the first track on Van Weezer, prior to the formal confirmation of the album's track list on April 20, 2021.[2]

"The End of the Game" Game

On March 26, 2020, a browser-based video game titled "The End of the Game" Game was released on the website theendofthegamegame.com. The game is a side-scrolling arcade-style shooter game in which the player controls one of four members of Weezer in attempt to defeat the alien from the song's music video. After defeating the alien, the player must navigate a screen filled with invisible traps in order to claim the "prize". Upon reaching the goal, the browser links to a YouTube video of Rick Astley's "Never Gonna Give You Up" (an example of the "Rickrolling" prank that became popular on the internet around 2007). The game claims on startup that there are 778 prizes left. Upon clicking the text "Contest Rules", they are linked to an online dictionary entry for "Hero".

"The End of the Game" Game was created by game designer Jason Oda, who previously developed games such as Continue?9876543210 and Skrillex Quest.

In August of 2019, a casting call was posted to backstage.com looking for extras to play "Weezer party goers" in an upcoming music video.[3] The music video was released on September 10, 2019. It was directed by Danilo Parra.

Hey, Suzy, where you been today?
I'm looking for you every way
No sign of you when I wake up
I'm on an island with no sun