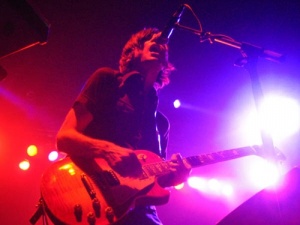 On April 29, 2005 Weezer performed in San Francisco, CA at The Warfield on their tour in support of Make Believe. The opening Act was Ringside.

...The Warfield is just a great place to see a show, and a fun place to host one. Kudos to the very helpful staff making it all happen with a smile. Also kudos to the experienced security staff keeping things safe around the backstage doors when all kinds of wild characters (not the fans, but troublemakers and roughnecks) seem to zero in on the block the Warfield is situated on!

Tonight was a hometown show of sorts for Ringside as several members are from the Bay Area, and their response from the crowd was appropriately kicked up a notch. They do seem to be winning many people over so far this tour, which is cool because they are doing a great job.

Weezer is working harder than ever this tour, doing all they can to dial in the songs as tight as possible. The spirit of cooperation and professionalism is alive and kicking, and each show so far has sounded better to me than the one before, and it wasnt too shabby to start with. we'll see how the sudden shift to a massive outdoor show setting (Coachella) is handled tomorrow.

the after show scene downstairs was packed with guests and VIPs, including weezer's 2000 tour manager/soundman Neil Young (the other Neil Young!) and AM Radio/Food leadman Kevin Ridel.