On July 19th, 2013 Weezer played live for the The Walking Dead 10th Anniversary Party, an invitation-only event at the San Diego Comic Con, held on a parking lot in the Gaslamp District. Ozma's Daniel Brummel filled in on drums that night, as Patrick Wilson was unable to attend. 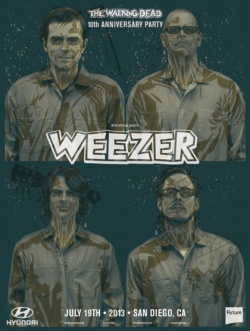 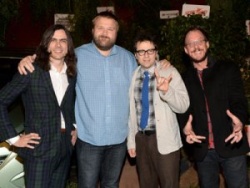 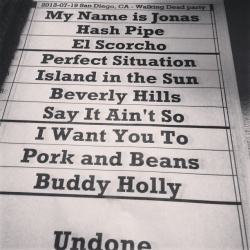 Scott Shriner spoke about his connection with ‘The Walking Dead' to the LA Times at the event:

"Weezer doesn't exactly embody apocalyptic survival culture, but Weezer and Walking Dead both have thrived within indie subcultures and appeal to fans who float on the fringes... I got into the comics backward after the TV show. I lost touch with the comic culture for a while and thank The Walking Dead... for reconnecting me with what was an important aspect of my younger, snarkier years." 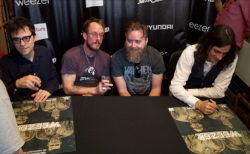 Poster signing with Rivers, Scott, Brian, and the artist. Photo via Brian Ewing

Rock artist Brian Ewing designed a set of four, limited edition 18" x 24" screen-printed posters in three different colorways (Choking Blue, Blood Red, and X-Ray Black), limited to 100 sets each. The Blood Red and the X-Ray versions were available on the SDCC show floor at the Walking Dead booth and online, with a few available at Ewing's own booth; the Choking Blue was later created due to the popularity of the posters at SDCC, and available online. Each featured a "zombified" version of one of the band members. In addition, a separate, offset promo poster featuring all four of the band members together were given out to those who went to a special Walking Dead/SDCC signing event with the artist and the band prior to the party.