Brummel graduated from the Los Angeles County High School For The Arts in 1999, received his Bachelor of Arts degree in music composition from UCLA in 2006 (where he studied orchestration with Paul Chihara, voice with Don Neuen, and guitar with jazz legend Kenny Burrell and his Master of Music degree in commercial music from CSULA in 2016. As a singer, bassist, guitarist, keyboardist, and drummer, Brummel has performed consistently on international tours with his various projects since 2001, when The Michigan Daily dubbed him a "pop-culturally aware songsmith" at age 19. He has also led interfaith community music events, sang protest songs, and performed experimental folk music at the Los Angeles County Museum of Art, the Hammer Museum, the Norton Simon Museum, the Los Angeles Central Library, and the International Association for the Study of Popular Music. In March 2011, Brummel was artist-in-residence at Machine Project Gallery in Los Angeles, where he hosted Skylike Notdoings, a series of events exploring the connection between music, meditation, Eastern spirituality, and dreamwork.

More recently, Brummel co-wrote the song “Eulogy For A Rock Band” with Rivers Cuomo and Ryen Slegr for Weezer’s 2014 album Everything Will Be Alright in the End. He then served as music director and touring member (guitar, keyboards, percussion) for Weezer’s fall 2014 album release tour, coordinating and conducting a new 18 person fan choir in each city. In 2016, he joined Nada Surf as touring bassist for the North American dates of the “You Know Who You Are” album release tour, substituting for original bassist Daniel Lorca and garnering praise for being “as talented of a musician as the band could have asked for to fill in.” In academia, he served as the Dean of the California College of Music from 2015-2019, achieving the institution's initial accreditation through the National Association of Schools of Music, and he currently serves as the Chief Academic Officer for Point Blank Music School in Silver Lake. 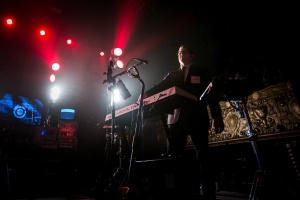 Brummel on tour with Weezer in 2014

Daniel Brummel and the Contraband

Gone with the Ghosts

As a Solo Artist