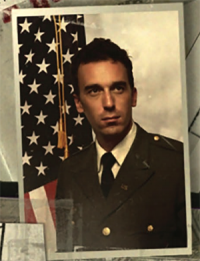 Joe Laffoley as seen in the album's liner notes

Joe Laffoley (also spelled as "Joe Lafolley" in the liner notes) is a character from the 2014 Weezer concept album Everything Will Be Alright in the End. He appears in the teaser videos portrayed by actor Colin Martin. Artist Johannes Gamble (who previously directed the music video for I'm Your Daddy) is also credited as portraying the character, as is Weezer bassist Scott Shriner, who provides the vocal clip "I'm proud of you, son" heard at the beginning of "Ain't Got Nobody".

The teaser videos for EWBAITE show Laffoley, an employee of some kind of facility in 1965, observing visual transmissions from various periods in the future through a machine resembling an oscilloscope (Futurescope named on the album). The script for the teaser videos describes Laffoley as a "22-year-old (Harvard) University scientist prodigy" who constructed the Futurescope in the basement of a Harvard University building to answer three burning questions: How he can find a girl, how he can find fame, and how he can find his father. The transmissions largely center around a younger man named Sebastian at various points in his life, from childhood to growing up and becoming the lead musician in a band called The Astronauts. Laffoley is seen taking extensive notes and behaving secretively, trying to hide his findings at various points, continuing his research in secret even as his superiors cut the power to his research laboratory. In the final teaser video, Laffoley observes Sebastian winning an award for Album of the Year. Sebastian then dedicates the album to his father: Joe Laffoley. Realizing finally that Sebastian is his son, Laffoley smiles to himself, as the machine's power is cut off and he is carried away by men in white suits.

Joe's fate in the videos is deliberately left ambiguous. An EWBAITE-themed t-shirt designed by comic arist Alec Longstreth in 2014 features a gravestone listing Laffoley's date of death as 1965. The script, released online in 2020, mentions that Laffoley was fired from Harvard in 1968 and met Claire, a receptionist in the science building, in 1970, the year that Sebastian is born. The script adds that Laffoley then "becomes a nobody" in Lexington, Massachusetts and, wanting more in life, leaves the family in 1973 (around the same time that Rivers Cuomo's own parents, Frank and Beverly, divorced), before finding a meditation center in Twentynine Palms, California. The ending of both the script and videos imply that Laffoley has recently passed at the time The Astronauts win the award for Album of the Year.

The liner notes for the album feature a photo of Laffoley (accompanying the Patriarchia section), with the back of the liner notes reading "Transmissions received and sorted by Joe Laffoley, 1965, 4th level literati." followed by the EYD insignia.

Joe Laffoley is almost certainly named after artist Paul Laffoley. Rivers Cuomo, with the release of the demo compilation Alone XI: The EWBAITE Years in 2020, included photos of Paul Laffoley's works among other images from which he drew inspiration for the album, including an album cover mockup for EWBAITE based on one of Laffoley's works.

During shows on the Everything Will Be Alright in the End Tour, musician Daniel Brummel, who accompanied the band on guitar and keyboards, dressed up as Laffoley (with Cuomo in costume as Sebastian).