Posted on Weezer's official Facebook page as part of the "Today in Weezer history" series on January 13, 2014.

Today in Weezer History: 1/13/1997 - On this day in 1997, Weezer played in Richmond, VA at the Flood Zone in support of Pinkerton, with Nerf Herder opening. Near the end of this show, a very strange incident occurred. In the words of weezer.com's Karl: "The Tale Of RHINO-LAD. A giant sized fan rushed the stage as the band were playing "Surf Wax America" in the encore. He climbed up on the stage on Brian's side (stage right) and made a diagonal bee line across the stage for the amps on the opposite side. He looked young - but he was 6' tall and built like a football player, clearly both "big boned", strong, AND rather overweight. He just sort of went mad, I guess the weezer music drove him to go crazy. So anyway I try to grab him to push him back off stage, but he was like a dump truck, I could not steer him at all - I grabbed on to him and he literally dragged me across the entire stage like I weighed nothing! He then proceeded to crash into Matt's and Rivers' (huge, heavy and tall) amps, totally knocking them over like they were made of paper, and of course stopping the show. He was all flailing about and howling, still pushing stuff over even as I lay on top of him trying to stop him! We had security drag him off to a back room, as we were PISSED. Matt's rare and valuable Orange amp was totally broken, not to mention the disruption of the show and other damage... So we tried to get things functioning but theres too much damage, so the song is cut short, fortunately it was the final song of the encore anyway. Back to deal with the crazed fan. SO it turns out, this kid is all of 12 years old!!! He's in the room backstage all blubbering and crying with a squeaky little kids voice, saying he was sorry over and over again, just wailing! What the hell? We didn’t have the heart to file a charge or anything, we just sent him home. Bizarre? Yes. We named him Rhino-Lad." -karl

Todays image is a new illustration by Alec Longstreth, who writes and draws the excellent comic book "Phase 7", whose recent issues of which have been his awesome recollections of becoming a weezer fan and going to weezer shows back in the old days. Alec also illustrated the posters for the Memories Tour and is an all around good guy. Check his stuff out at http://alec-longstreth.com/ ! #weezer #nerfherder #rhino #rhinoceros #richmond #virginia #viginiaisforlovers 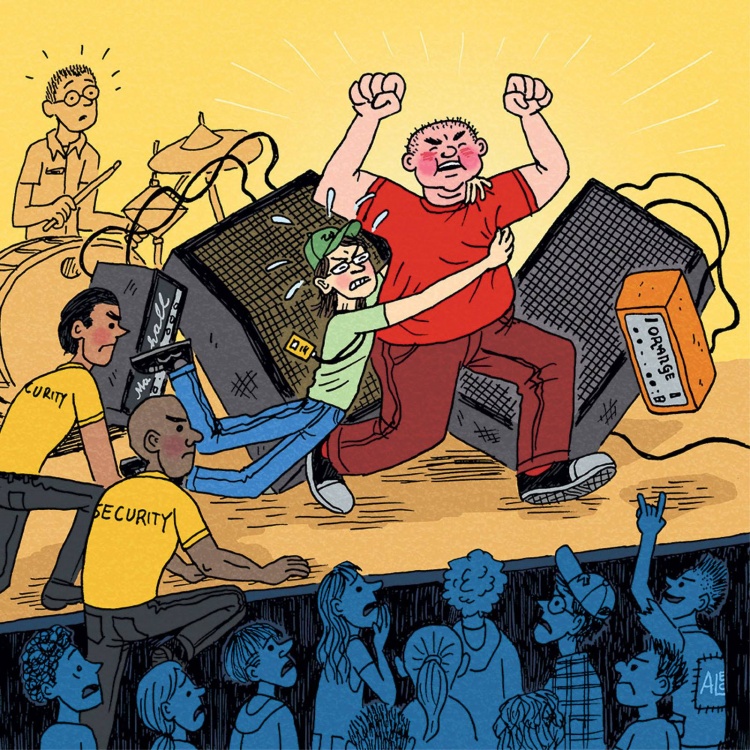