English Acid was a weekly club within a club, at a location on Santa Monica Blvd. in Hollywood that [I believe] has since been closed up]. Its reputation was a little seamier and weirder than the average club, with the decor on the 'burlesque' side. But there were many rocking shows there.

This show was headlined by Thelonius Monster, who at the time were doing pretty well, with their "Try" [?] video on 120 Minutes, so it was kind of a "score!" gig for weezer. Unfortunately weezer had to play before the other opener, the Tolkien/Sabbath-esque Wood And Smoke. The notes for this show only say "equipment failures, but the crowd was still stoked." Considering the state of weezer's equipment at this point in time, this note isnt too suprising.

105px
there are no [known] photos from this show. flyer design by karl, using random Manga image.
[click on any photo for a larger size pop-up version]

Posted on Weezer's official Facebook page as part of the "Today in Weezer History" series on December 2, 2013.

Today in Weezer History: 12/2/1992 - Weezer plays their 34th show. Today in 1992 Weezer played at English Acid, a club on Santa Monica Blvd in Hollywood (now known as a non-rock venue called "Voyeur"), opening for Thelonious Monster, the Bob Forrest fronted L.A. band who have been around since 1986 and had ties with the Red Hot Chili Peppers. They were playing to support their recently released fourth album "Beautiful Mess". Also on the bill was the heavy classic rock/psychedelic band Wood and Smoke, who were playing a heavy early '70s rock style at a time when that was possibly even less cool in the (slowly dying) glam-metal L.A. scene than the alt-rock that Weezer was playing. (search YouTube for their '91 demo song "Monogamy", it's pretty good stuff). No known photos, though Karl remember's a scintillating orangey psychedelic lightshow for Wood And Smoke, and about 20-30 people in the audience. Setlist unknown. 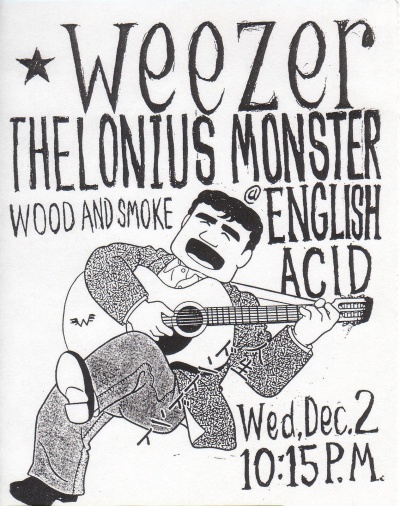