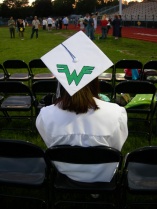 Dateline: an undisclosed location in Southern California, deep inside weezer lines. Im sitting in a large room that normally doesnt serve as a place where bands record their albums, watching weezer, well, record their album. But then this band isnt known for doing things normally. And this album, their 6th, is sounding pretty far from 'normal' so far.

There wont be any song titles or other detailed in-progress info in this report, but I can describe the vibe in the room and the sound in the air. The vibe is healthy, full of dialogue, cooperation, forward thinking and interested experimentation. The sound is definitely weezer, but not quite like any weezer I've heard before. Or rather, not like any one style that weezer has ever tried, but a fresh combination with some new flavors on top. It sounds as if the band has grown into a new land that they had previously only skirted around the edges of - a land where arrangements are getting adventurous, where song structures, lengths and feels are given plenty of sunlight and fresh water and allowed to grow into what the songs demand. It sounds really cool. Like an excellent music farm. Or perhaps a food co-op.

The band started this session on Monday July 9 and is scheduled to continue recording here till October. They came into this session with 6 weeks of earlier springtime work under their belts, which yeilded perhaps half of an unfinished album. Now theyve got their sights set on the other half, and all the overdubs and touches the final set of tracks will need to be ready for the world in '08. Based on what I've seen over these past 2 weeks here at Camp Weez, they should have no trouble delivering the goods.

And while the band works on, other weezish things have been cropping up:

...'Only In Dreams' makes #8 on a list of the top 10 guitar songs ever, as voted on by the likes of Ronnie Wood, Jimmy Page and Andy Summers. Aside from the early 80's Scottish band The Skids, no other modern band made the list, which is mostly stuff like Zep, Beatles and jazz and blues legends. Who knew? (...we did, haha)

...Interview with original weez bass player Matt Sharp, leader of The Rentals, in which he is asked about what it was like being with the original weezer lineup at Rivers's wedding last summer.

...another Matt interview in which he is asked about comparisons between being in weezer and being n the rentals. Dont miss the "Tale Of The Tape" PDF.

...Weezer signed guitar up for charity auction. Proceeds go to the Jimmy Fund and other cancer charities.

...follow up: An article on the Ohio State professor who used the Weezer lyrics in her curriculum and had Rivers teleconference in during a lecture.

...In the 'I didn't know that' dep't, Scott Shriner makes an appearance in the Dandy Warhols/Brian Jonestown Massacre documentary "Dig!"