Run Over by a Truck

"Run Over by a Truck" is the second track on second disc of the Deluxe Edition of Raditude.

"Run Over by a Truck" appears as track two on the deluxe disc that comes with Raditude. The song was originally written in 2007 (as listed on Cuomo's 4 and 5 star demo list) and was likely a contender for The Red Album at some point, appearing on the demo compilation Deliverance at Hand!. The song was produced by Jacknife Lee. A slightly different earlier mix of the song leaked online in 2017.

"Run Over by a Truck" received a highly positive review from Teenage Victory Songs, being marked as "The Very Best." 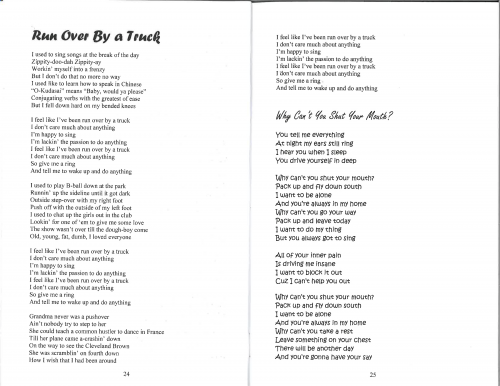 I used to sing songs at the break of the day
Zippity-doo-dah Zippity-ay
Workin' myself into a frenzy
But I don't do that no more no way
I used like to learn how to speak in Chinese
"O-Kudasai" means "Baby, would ya please"
Conjugate your verbs with the greatest of ease
But I fell down hard on my bended knees

I used to play B-ball down at the park
Runnin' up the sideline until it got dark
Outside step-over with my right foot
Push off with the outside of my left foot
I used to chat up the girls out in the club
Lookin' for one of 'em to give me some love
The show wasn't over till the dough-boy come
Old, young, fat, dumb, I loved everyone