Who You Callin' Bitch?

Karl Koch described the song as being “slow but huge, rocking.” "Who You Callin' Bitch?" was officially released on Alone: The Home Recordings of Rivers Cuomo

In the song, like "You Won't Get with Me Tonight", Maria becomes angry after she hears Dondó call her a bitch in "Blast Off!". Jonas attempts to calm her down. 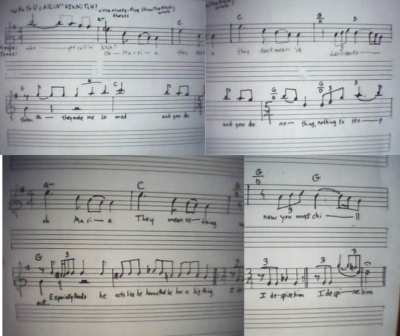 Sheet music for Who You Callin' Bitch?

[MARIA:]
Who you callin' bitch?

[JONAS:]
Oh Maria, they don't mean it
Don't listen to them

[MARIA:]
Oh, they make me so mad and you do nothing
Nothing to stop them

[JONAS:]
Please Maria, they mean nothing
Now you must chill out

[MARIA:]
Especially Dondo
He acts like he knows that he has a big dick
I despise him