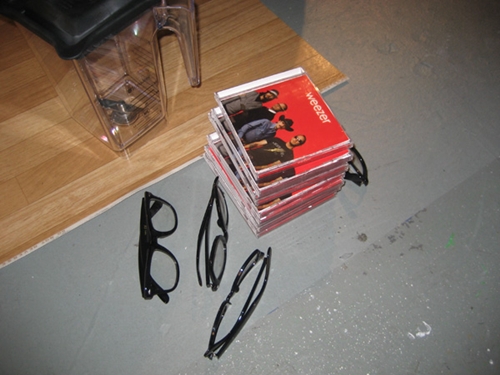 People, due to popular demand and the intense reaction to the Pork And Beans single, the wait time for the new album has just been reduced! The album will now be in stores in the USA on JUNE 3RD! Here are the release dates (USA and International as known so far)...

Note - the Deluxe edition of the album will be digital only initially. Collectors and completists may have to wait a while for everything to be available non-digitally. More info on this as it becomes available.

...Okay, so the 'Pork And Beans' video was shot from last Wednesday to Saturday, with director Matt Cullen and his amazing crew. Everybody involved did such a great job. Words are not really adequate to describe the things I saw those 4 fateful days. Suffice it to say that rules were broken and boundaries were pushed back! This video should be out sometime in the coming weeks. More details as they become available.

...Thanks to Meebo for a new Weezer branded chat room you can use on Weezer’s MySpace or Meebo.com!

...Plug 1: I saw The new film "The Dhamma Brothers" the other day at its L.A. premiere screening. This is the film that Rivers helped out with, about Vipassana meditation in an Alabama prison. Its a really beautiful film, so if you see a screening coming near you, be sure to check it out. It will be in DVD at some point too.

...Plug 2: Super long time weezer fan Justin H. has been making cool music of his own for some years now, and his band Zomo is releasing not one but two new albums. If you are into weezer, you'll probably dig this stuff!

The Buzznet Pork And Beans Foodfight