Land Air Sea is the third studio album by The Special Goodness.

Land Air Sea was initially released on N.O.S. Recordings in 2003 and later remastered and reissued on Epitaph Records in 2004. Due to the by-now cemented lineup and refined material, Patrick Wilson considers Land Air Sea to be the band's "first true release", despite it being the third official release under the Special Goodness name. "Pay No Mind" and "Pardon Me" originally appeared on The Special Goodness in 1998, with "You Know I'd Like...", "Life Goes By", and "Whatever's Going On" originally appearing on At Some Point, Birds And Flowers Became Interesting in 2001. 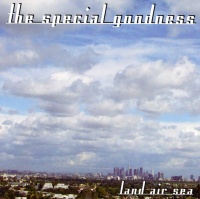 Land Air Sea was originally released on March 4, 2003 on N.O.S. Recordings. The original N.O.S. version was released with three different cover artworks, officially titled the "Skyline", "Farmland", and "City Lights" variants[2]. Due to this, the original N.O.S. release has no true single cover art. A reissued edition of Land Air Sea was released on Epitaph Records on January 20, 2004[1]. This version featured a new track order, remixed and remastered songs, and the omission of the untitled hidden track included in the first release.

*indicates that the credit is only present on the 2004 Epitaph Recordings release.

The 2004 reissue of Land Air Sea contained additional bonus content on the album's CD, which could be accessed if loaded into a computer. The disc contains a text file, two videos, and 50 photos.

A file titled "hello.txt" contains a message from Pat regarding the enhanced contents of the CD.

hello,
these are the bigger images from the cd artwork, we thought it would be cool to have them included on the disk. they don't really have any significance other than i like them and this is what our world looked like while working on the songs. next time we'll have more stuff!
pat

The music video for "Life Goes By" and a live performance of "N.F.A." are included under the filenames "life_goes_by.mpeg" and "nfa.mpeg" respectively.

A collection of photos (mostly those used in the artwork of Land Air Sea) are included in a folder titled "Photos".