"The Data Lab" logo in black and white

The Data Lab was the short-lived official fan club of the Rentals from 1995 to around 1997. It was run by Mykel and Carli Allan, who also ran the Weezer fan club. 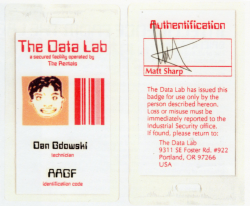 An example of an ID card given to Data Lab members

The Data Lab came to fruition in Summer 1995 when Matt Sharp approached Mykel and Carli about forming a Rentals fan club.[1] The sisters, who had been running Weezer's fan club for a number of months already, obliged and got to work organizing materials and gathering members. The club was formed and named, with the choice made to loosely theme it around the concept that the Rentals' members operated in a discrete, mysterious facility, with club membership gaining fans access to its confidential information and products. A mailer was sent by the sisters to those in the Weezer fan club, offering membership to the Data Lab (in exchange for a $5 annual fee).[2] The mailer additionally contained a message from Sharp titled "Intelligence From the Lab" where he described what the Rentals was and discussed the release of Return of the Rentals, as well as an order form for Rentals merchandise. Those who signed up to the fan club received a custom ID card (fashioned after a security badge) signed by Sharp, stickers, and a promotional cassette single featuring "Friends of P." and "So Soon".[1][3] The Data Lab received multiple hundreds of members during 1995 and 1996.[1]

A letter from The Data Lab addressed to "All Lab Technicians" with the subject "Intelligence Report" was sent to fan club members in July 1996. It contained news about the recent activity of the Rentals, as well as a "Personnel Status Report" on each of the band's members describing what they were working on at the time.

In response to the unexpected success of "Friends of P.", the Rentals' label, Maverick Records, began more rapidly producing promotional items and goodies for the band to distribute. No less than 4 different sticker designs were printed, which would be given to Mykel and Carli to send out. Additionally, an unknown quantity of unique lanyards were produced, intended to be sent to fan club members as a counterpart to the ID badge design. It is uncertain whether any lanyards were sent out.[1]

At some point between 1996 and 1997, Sharp requested that the sisters put fan club activity on pause until the Rentals were active again.[4] The Data Lab would then effectively become disbanded following the death of its founders, Mykel and Carli Allan in late 1997. Sharp would not officially announce the end of the club and stated there would be updates on its status after the release of the next Rentals album. In 1998, a note was left inside Weezine Issue 13 stating:[5]

Matt is looking into starting up the Rentals fan club again - but he needs help! If you think you have the skills, time, and healthy attitude to take on such a task, send us your "proposal", and Matt will check it out. Serious offers only should be sent to this address. No decisions of any kind will be made for quite a while.

A new iteration of the Rentals' fan club, seemingly (though not definitively) separate from The Data Lab, would be created by the early 2000s. Information on the reformed club is poorly documented online.