On March 11, 2002 Weezer performed in Lisbon, Potugal at the Lisbon Coliseum on their Europe Tour preceding the release of Maladroit. This was Weezer's first concert in Portugal.

Well, the time came for weezer to be introduced to Portugal. Todays show was in beautiful downtown Lisbon, at the Lisbon Coliseum, and as we discovered, was part of a festival series of concerts sponsored by some huge beer company. The Lisbon Coliseum was a bit on the big side for Portugal newcomers weezer, but thats where the beer festival was taking place so thats where the rock was played. We were kinda worried when we first walked into the place, but there was actually a pretty respectable turnout for the bands first ever show in Portugal! And the best part was that these folks were very stoked, showing their appreciation for the brand new and old school weez alike.

Tonight's set was a pretty wild blend of old and new material, and included several songs not heard live since summer 2000 ("Modern Dukes", "Mad Kow", "Superstar"), and several songs heard only briefly in the summer of 2001. (well, i think so, anyway- its getting kind of hard to keep track of this stuff these days!) 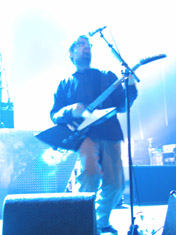 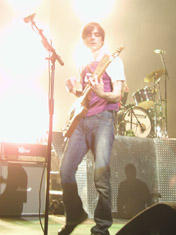 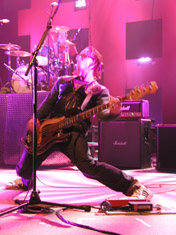 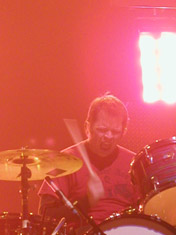