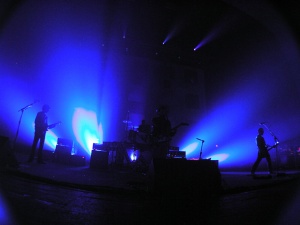 On March 24, 2002 Weezer performed in London, United Kingdom at the Brixton Academy on their Europe Tour preceding the release of Maladroit. The opening act was Remy Zero.

So the weez train rolled into the Brixton Academy, just down the street from the very cool Brixton skatepark, capping off the European Tour with the 5th of what turned out to be 5 killer UK shows. Nearly 4000 fans packed into the Academy and went berzerk, which apparently is kinda unusual behavior for this venue. Members of several bands were in attendance tonight checking out the weez action, including Travis, Muse and Ash.

A heartly thank you to the fans, the crew and all the local help that made this all-too-breif tour such a success. But its not over yet! Now we head to Paris for a couple days of interviews and TV and radio appearences.

...And so, Brixton rocked. I just got back, my head is ringing, Only In Dreams ruled the world, and Rivers can't remember the words to Happy Together. And yet, through all of this, the band was amazing, tight as heck. Plus, Bass playing man? NONE MORE METAL!!! Awwww, my head hurts... ---James

...It's hard to believe someone when they say 'best show ever'. You instantly assume that perhaps they're still just a little too excited post show and are exaggerating the shows quality. But I can't stop myself from saying it anyway. Best show ever. As great as the =w= shows in London were last summer, this blew them away. Great set, great setlist, great crowd and a great performance... ---Chris

...I know I should really be in bed but I thought I'd let you guys know that this last uk show was fantastic!!!! Remy Zero were great and a really good warm up for what was to come!! I had a fantastic view of the stage (but why must taller people always find it necessary to stand in front of me??) and the lighting and sound were tip-top! I was a bit sad I didn't get to hear Keep Fishin' but the set list was great - a nice mix of old (Undone was superb!!), new (great versions of Dope Nose and Superstar) and still to come (Modern Dukes). So please come back to the uk more often as we need you! ---Tim