"Why Bother?" is the fourth track on Pinkerton.

"Why Bother?" was written and demoed by Rivers Cuomo in early 1994, months prior to the release of The Blue Album. Initial pressings of Pinkerton feature a sticker on the shrink wrap listing "Why Bother?" as an included track. It is unknown if this suggests that the song was considered for release as a single release at some point.

A live version recorded during the Enlightenment Tour in 2002 was released as the lead track on a 2003 double 7" compilation To Benefit Petra Haden, alongside AM Radio, Phantom Planet, and Ben Kweller. The record set was released as a benefit to help cover medical bills for that dog.'s Petra Haden, a longtime friend of the band who had recently been in a serious car accident.

In 2005 and for a few years after, "Why Bother?" was typically performed with guitarist Brian Bell singing lead vocals. One such recording from 2005 was included on the Japanese Red Album bonus DVD in 2008. The lyrics "So I'd rather keep wackin'," are sung by Bell as "You better start packin'." Eventually, in 2009, Cuomo would resume lead vocals on the song. Another live version, recorded in Tribeca at the PC Richard and Son Theater, was released on the 2010 EP ...Happy Record Store Day!.

"Why Bother?" was considered for inclusion at some point during the writing of the scrapped concept album Songs from the Black Hole. An early draft slots it in towards the end of the story. "Why Bother?" was included in the "Longtime Sunshine" coda, first released on the Deluxe Edition of Pinkerton. 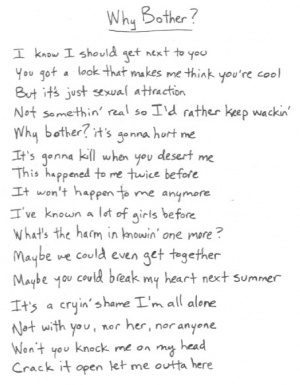 I've known a lot of girls before
What's the harm in knowin' one more?
Maybe we could even get together
Maybe you could break my heart next summer

It's a crying shame I'm all alone
Not with you, nor her, nor anyone
Won't you knock me on my head
Crack it open let me outta here.