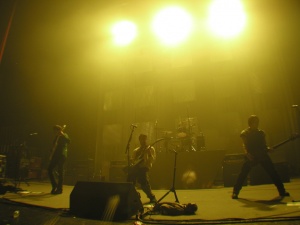 On March 19, 2002 Weezer performed in Manchester, United Kingdom at The Apollo on their Europe Tour preceding the release of Maladroit. The opening act was Remy Zero.

...wild rock explosions! After the truncated Spanish shows, it was time for a return to the full size weez at the Manchester Apollo. This is the first of 5 shows with Remy Zero, but unfortunately Remy Zero's singer was suffering from laryngitis, so they were forced to do a drastically shortened set. Then the weez busted out with a fresh setlist and met an extremely stoked crowd. Earlier during the day phone interviews and photography were done for Pulse Magazine.