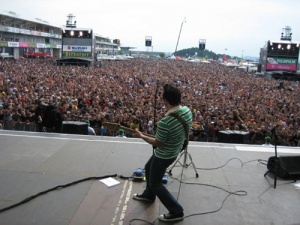 On their tour in support of Make Believe Weezer played the first day of the 2005 "Rock am Ring" Festival which is held simultaneously with the "Rock im Park" Festival from June 3 - June 5.

Today we got on the bus (heretofore known as the Shantymobile, for various reasons including its broken air conditioning and very unfortunate top speed of 50 mph) and headed off to Nurburgring, which is the home of a very large and well known 'Ring', i.e. an automobile racetrack. It is in fact this very track where the festival takes place over 3 days. This is the 20th Anniversary of the Rock Am Ring / Rock Im Park festivals, but the first time Weezer has been a part of it. Todays show was quite well run, and things went pretty smoothly for weezer despite no possibility of soundcheck and a very small window of time for the weez crew to get things set up after the previous band left the stage. The only tech issue came up during "Photograph" when a guitar mix up led to some odd sounding chords till the band re-adjusted by ear mid-song. Despite that, the band was positively glowing on stage, clearly quite stoked to get back out after the break and happy to play for such a huge audience, who definitely recieved weezer well, especially the Euro-hit "Island In the Sun", as well as "Drugs" and "Hash Pipe".