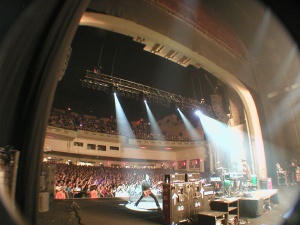 On June 14, 2005 Weezer performed in London, UK at the Brixton Academy on their tour in support of Make Believe. The opening act was Tegan and Sara.

...MB '05 Tour: Day 34: London, UK - Brixton Academy #1
Today we drove down to Brixton from the hotel for the first of 2 shows at the Brixton Academy. The Academy is, well, in Brixton, which is known as one of the rougher parts of London, to put it mildly. However, while the area's reputation sort of precedes it, its actually pretty mellow at least in the daytime around the club, with a cool old skatepark across the street and a few shady dealer types milling about doing their, uh, thang. Certainly calmer than this famous song would have one think. But then, I dont live around there so what do I know. Anyway, we rolled in and soundchecked and the people came in and the show was on. Before the doors opened up I walked the line' and shot the breeze with some of the fans in line. We've got some JONAS members over here, and they want stickers and posters to distribute! Can this be done? Hmm. Up first was the most excellent Canadian band Tegan And Sara, who weezer are most pleased to welcome aboard for the 2 London gigs. Then weezer did their thing, which is to say, delivered another in a strong string of powerful gigs.

It was great to see Weezer in London again. The gap between each time the guys visit is always just long enough to make you forget how bloody crazy Weezer shows are compared to most others. My throat is raw from singing louder than I have in years, my body is screwed from dancing about and I'm sure loads of other people can say the same. The band were awesome, but you have to give it to the fans for making the show as good as it was. Other shows just aren't like that. ---Chris S.

So i rolled into london at 3pm and couldnt resist heading straight to brixton to see what was going on. I bumped straight into a friend Billy and his friends who had been at the venue since 1.30. I start queing with these guys enjoying lager and a bad chicken sandwich and admire the weezer cup cakes billy and his mates have made. the time flies by as does brian in a car stareing eerily at the crowd at one point, where was he goin?! we say hi to karl who loves the cakes and is amazed by everyones stamina for waiting about. At various points i jump in and out the line to go 'relieve' myself in local pubs and restaurants (thanks nandos!) Finnaly my best bud tom shows up (he had to work late) at about 6:30. we sneek him into our group though the fans around are cool! we do a skit for some mtv show where we are 'weezer geeks' and get hounded by some jocks (Weird!) though i think we got the better of them anyway... Finally doors open and we are at the front against the barrier. Time is flying by its unreal. the support has been and gone and at last it all goes dark for the weez. I havent seen them in three long years and for the first time in so many recent gigs my stomach has knots! the crowd goes bananas at the kick in to 'tired of sex' and rock out later to 'buddy holly'. Its a great set that showcases the classics as well as the new album (loved no one else) the band seem a little quiet at first but soon enough scott is waving and smiling and throwing his picks and just before 'beverly hills' rivers throws his in my direction, no one pays much attention as there is a kid behind us shouting and coming forward to be sick! still i look down, see the pick and grab it, ramming it into my pocket before enjoying the rest of the set. 'good life' and 'hash pipe' stand out though 'pardon me' and 'haunt you' have a raw emotional edge. Getchoo with brian on vocals was pretty cool to seeeeee too. Before we know it though the show is over. Rivers looks the happiest i have ever seen him in any interview, video etc and its right before out eyes. He waves salutes and leaves the stage confirming the weez are back and have conqured london! ---adam, london

After a quick train journey to Brixton it took us little time to find the academy. Once in we were amazed by the academy and just how cool it looked. Tegan and Sara, the suppourt act were unbelievably loud but cheered on all the same. When the roadies came on tuning up the weezers guitars tension began to mount which finally erupted when the weez came on stage. Sounding great they burst through the set what seemed very quickly. My favourite moments were Brian on Getchoo, the lowering of the great =w= sign and the singalongs to weez classics. You could see the fans enjoyed the concert flocking in their hundreds chanting wee-zer. This was my first weezer concert and hopefully one of many more and something I will never forget. Thanks guys. Great show. ---Chris J.