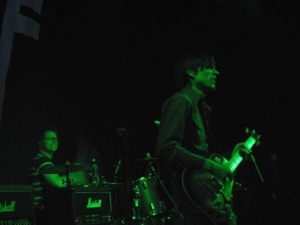 Pat and Brian performing in Dublin.

On June 7, 2005 Weezer performed in Dublin Ireland at Vicar Street on their tour in support of Make Believe. The opening act was The Subways. This was Weezer's first concert in Ireland.

...MB '05 Tour: Day 27: Dublin, Ireland - Budrising Festival at Vicar Street
At last, weezer in Ireland! For reasons no one really can figure out, it took that long for weezer to visit here, despite many European tours over the years. But at last its a reality.

The Budrising Festival is sorta like the CMJ thing in New York, or SXSW in Austin. Rather than having a bunch of bands gather at a festival grounds at one time, they simply schedule a bunch of shows over a several day period in the city, at all the local venues, and collectively label it a festival. Because of this and the other festivals that weezer was signed up for on this tour, te scheduling was tricky. There was a ton of work done to try and get a bigger hall, but Vicar Street on June 7th ended up being the was the only available gig for weezer, whatsoever. Everything else in town was booked, both tonight and at every other time.

Despite those factors, everything came together, from the crew doing some utterly herculean tasks with mostly rented gear and very little time to sleep, to the band dealing with the heavy travel schedule to give what looked and sounded like their best performance of the tour so far, to the fans who patiently endured a decade long wait and then a mad scramble for tickets when it became apparent that there werent very many to be had! The Irish people was SO stoked and SO nice to us. The overall experience in Dublin was just amazing!

Tonight was the second night The Subways opened, and props to them for bringing their 'A' game and a healthy dose of the rock!

Tonight also saw the debut (and possibly only appearance) of the "projected W". As most of the gear had to go directly from Hamburg to Paris, as theres no way to truck all that stuff from Hamburg to Dublin to Paris in 3 days with 2 water crossings, etc, the crew had to rent most of the gear. The giant "=w=" light was absent, so a computer file of the W logo was given to Lightnin' Leif the new lighting guy, who projected it onto the backdrop. It looked pretty cool actually!

top class stuff, my man! weezer were on fire (so much for rivers bein a dry-i thought he came out of his shell a good bit!!) the set was excellent, scott was rockin the bass and pat was bashing those drums like something else!! i'd just like to thank you on behalf of all irish =w= fans, for the show! hey by the way thanks for the photo on your way to lunch (i'm glad you guys found leo burdocks cause i was thinkin i shoulda recomended it to you after you guys had left!!) ---Cian