Posted on Weezer's official Facebook page as part of the "Today in Weezer history" series on December 16, 2013.

Today in Weezer History: 12/16/2000 - Weezer Plays The KROQ Almost Acoustic Christmas Show at the Universal Amphitheater in Los Angeles, CA.. This pair of shows (they also played it the second night, on 12/17), capped off a sort of triumphant return for weezer. They had been playing shows since the early summer, getting amazing responses from the fans after over 2 years off the road and out of the public eye. "The Cult Of Pinkerton" had developed in the meantime, as online fandom took off, weezer got credited for bringing 'emo' into the mainstream (though they never planned or intended that effect, and weren't even really aware of the original 'emo' hardcore genre when they made Pinkerton), and the legend around the absent band grew and grew, as did the sales of the once stalled and disregarded 'Pinkerton'. The summer shows were a great success and helped get their record label interested in putting out a new weezer record. Work had already started with Ric Ocasek on what would become Green when the offer came in to play the KROQ Xmas show, which at the time was a very big deal, especially since there was no new weezer music to promote. The full line up was Papa Roach, No Doubt, Deftones, Weezer, Moby, Incubus (w/ orchestra), Fuel, 3 Doors Down, Coldplay, & At the Drive-In. The Deftones covered "Say It Ain't So" during their set, which only served to open the eyes of the guys as to how their influence had grown in their absence. Photo shows Mikey Welsh in a moment of triumph on stage. 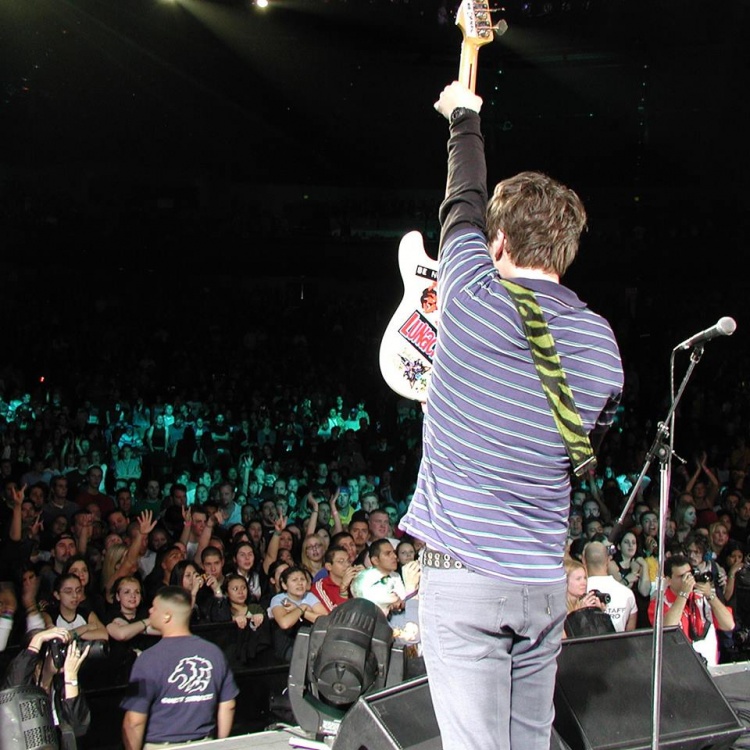