...Part 1: ...tons of you have written in with stories, both happy and sad, and lots of opinions of all sorts, regarding the events in NYC yesterday. Thank you everyone who wrote in! I just had to post some interesting quotes from the batch...

"...a friend of mine managed to make it inside TRL yesterday for that
whole NSYNC thing (there's just no accounting for taste) and she said that as
she was leaving there were actually tickets for that night's concert lying on
the floor. Damn teeny-boppers! She scooped up a couple before getting yelled
at by an assistant and gave them away outside..."

"...my friend and i did get into the show....the girl wound up taking us up to trl without us even asking...i'm being serious when i say that we were amongst few weezer fans, if there were even any weezer fans up there....let me just say this for mtv...even the people working there, like the aides and stuff, didn't know about the show until carson announced it, so i guess it was just poor communication...the mtv staff acted as an authoritarian body, and i was even threatened to be removed initially because i wasn't cheering. so basically i faked it until the ticket announcement, and after that i was actually energized...."

"...I managed to get a ticket out of one of the nsync fans from the studio audience. while sadly my friend ended up having to pay, the woman took pity on me and gave one to me. for free. i have never loved an nsync fan so much in my life.....At least some of the fans were merciful."

"...A bunch of
us =w= fans were able to scalp tickets from these little girls. I bought
mine for 40 bucks from a 15 year old N SYNC fan. My friend had to pass a
quiz a guy gave him about pinkerton and the b sides: no problem, we listed
all the songs on pinkerton in order and gave him more than enough b sides.
But the guy still charged him 50 bucks..."

"...it was kind
of funny, how Carson NEVER seemed to be able to get the title of the song
right! First it was Island IS the Sun, and I swear that near the end he
called it Island OF the Sun. What gives!? It must've been all the Nsync
hoopla. It was nice to see him today ask a fan about the concert, though,
and it was pretty cool how the fan flashed the ol' W..."

"...I especially loved the boos that were shouted when Rivers mentioned TRL."

(and in the "you learn something new every day" category...)

"...I visit weezer.com at least once a week and I am a devoted weezer fan.
I am also an 'N Sync fan. I was offended about what you said about 'N Sync
and their fans....All though I can not speak for
all 'N Sync fans, I am sure the majority of them respect other bands and
there fans and would not verbally abuse them...I am sorry that not all the
weezer fans got free tickets too. I would love to see a weezer concert and
would be disappointed if I had waited that long. But I must say that I have
also been disappointed when 'N Sync tickets sold out last year, so don't make
weezer fans seem like the only victims..."

"...I am a hugeee weezer fan but there is just one thing i don't agree with. I am also a fan of nsync and i think it's kind of hypocritical for you to attack them when you feel that fans of weezer were attacked by fans of nsync during that concert deal..."

"...i want to tell you a funny story, i had my weezer shirt on when i was outside [trl], and some jerk Nsync fan (weirdly a guy?!?) kept like making fun of me for being a weezer fan, he even took a couple swings at me...(i think he had 'friends' over for breakfast..namely Jack Daniels haha), but i gotta tell you it was so funny when i kicked him in the shin and he started crying...and he was around 17...anyway....that was probably the best part of my day..."

(more fan's tales of fun and woe in an upcoming new page of "Weezer Fans' News", located over in the "weezer fans" section.)

...today's show, by contrast, was smooth as silk. It took place at the enormous semi-outdoor "shed", the Tweeter Center, in Camden NJ just outside of Philadelphia. Also on the bill was our buddies from last night, Tenacious D, who rocked the house with just 2 acoustic guitars and a hell of a lot of style. Several hours later weezer hit the stage for a nice set, in a situation that reminded everyone of the huge festivals in Europe last month. Very cool. Everyone seemed to be having a great time... 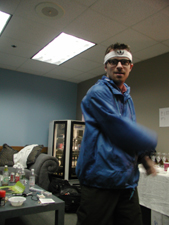 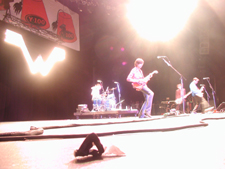 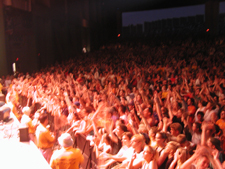 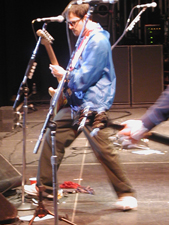 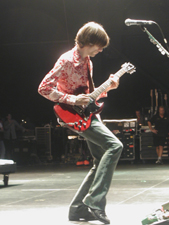 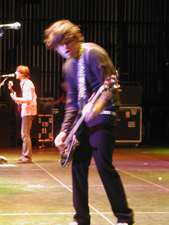 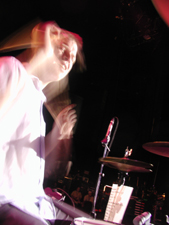 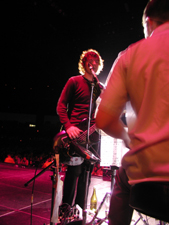 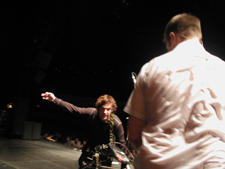 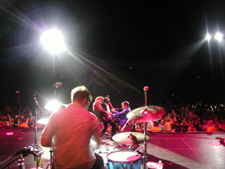 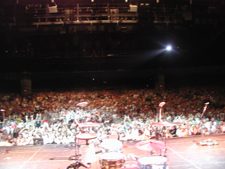 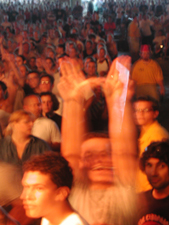 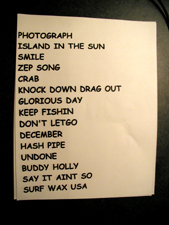