The hammer comes down... today the band learned from Interscope that they CANNOT start recording the new album unless they definitely have a producer! This flies in the face of the band's insistence on starting on October 23 "by any means necessary", and puts a serious damper on their hopes for getting the new record off the ground on schedule...Despite numerous meetings with potential producers, including some that they were even stoked on, as of this writing there is STILL no official agreement with anyone, and the guys must anxiously await word from their hopeful choices....

...The Sept 17th show in Clovis, CA now looks likely to be the LAST weezer show of the year, so if you were hesitating on going before, and you can make it there, dont sleep on this one!

...Many of you have asked about if its possible to buy the new weezer merchandise without being able to go to a show. Finally, we can announce that, while the details are not set yet, there will be (as soon as a bunch of stuff is sorted out) a full weezer online store built into the RWA, carrying all the shirts from the tour plus lots more! This as-yet-to-be-created page will replace the merchandise page and will even take credit cards. Please hold off on asking any questions yet, as 99 percent of the details are still up in the air. 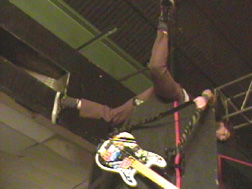 ...the wildness continues in Dallas...

"I almost died before the show started"-John Mendoza,Dallas fan referring to the nasty pushing and shoving that erupted before the band hit the stage

...Big thanks to Jimmy Kirk of Houston (pictured below with some freinds...what a motley looking crew!) for hooking up weezer with some much needed computer hardware!

...And also a big thank you to Martin Danyluk, whose outlook express fix-it suggestion was the only one of the many kind suggestions to work! Thank you everyone who sent some help, and big thanks to Martin for hitting the nail on the head!karl@weezer.net is fully functional again!

"I thought the vma's horrible. A good f***ing award would be with shows of Weezer, Nofx, Foo Fighters, Eel's and Radiohead. (Mtv Brasil transmited the vma's) --Regards, Renato Silva, from Brazil"
Renato's comment pretty much sums up what the majority of you had to say about the VMA's...thanks for responding!...now go get some new mpegs over at the WFO!