I write this from Las Vegas where we are stopped for a few hours to let the bus driver sleep. We are headed to tomorrows show in Clovis (Fresno) CA, on a marathon drive from Denver. The guys are catching up on their craps games, and in Rivers's case, mixing new songs that were recorded live on tour. ...The last two shows were a study in contrasts: In Albuquerque, we were given just about every possible technical difficulty, not to mention other random obstacles, and the guys triumphed in the end. In Denver, everything ran like clockwork...(and the guys triumphed in the end!)

...In Albuquerque, the El Rey Theater was in pretty bad shape, and it was the power system that proved to be the weak link. As the guys got into the section of new songs, the entire P.A. (club's speaker system) cut out entirely. While Pat did a crazed 70's style drum solo to keep everyones spirits up, the inept sound company did their pathetic best to get things up and running.

Finally things were back online.... for a song and a half. In the middle of "Superstar", the power cut in and out several times, prompting the guys to take a mid-set "power safety break" and wait for things to be fixed.

The fans were mellow at first, expecting a 5 minute delay. Unfortunately, it was determined that a whole new mixing board had to be installed, pushing the delay closer to 50 minutes! Our lighting guy, Dan, sprayed the hot irritated crowd down with water, as the rest of us waited,, crossing out fingers that the problem would be solved. Finally, things were back on track, (Mikey playing in his underwear notwithstanding) and the set was completed. After waiting so long for a weezer show, the Albuquerque fans were not to be denied! 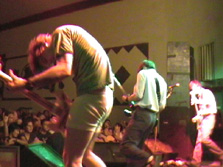 ...The Denver show was much much smoother and simply rocked hard from beginning to end. The Ogden Theater provided a nice "arena" for all the fans to sing along at the top of their lungs. It was nice to have the show go off without a hitch.

...A lot of people have been asking about the KROQ Kevin and Bean Breakfast show that weezer was supposed to be doing soon... Well, after getting the runaround for several weeks, we have learned that weezer has been "pre-empted" in favor of some other band! The band is extremely disappointed about all this, as they were really looking forward to giving the fans that kind of an intimate and interactive live performance. Stay tuned for new information on this as soon as we have it. And in the meantime, come to the Clovis show if you can, and show the world which band's got the best fans!

...weezer in print: short but sweet articles on the band have appeared recently in:
Entertainment Weekly (With Richard from Survivor on the cover)
Alternative Press (With Papa Roach on the cover)
...and are mentioned in The latest Wizard (with Angelica Joile on the cover), as part of the "top 100 celebrity comic book freinds", for having X-men characters in "In The Garage"