...call it destiny. Pat gets a totally random visit from Jay on one of his "Jaywalking" segments back in January, now 6 months later Weezer are the musical guests on the Tonight Show for the first time. They make you show up early and stick around all day at the Tonight show, but we managed to entertain ourselves in the "downtime" with plenty of hackey sack, and getting lost in the NBC studios.

...We arrived at 10:30 AM, and the guys did a soundcheck, and something called "camera blocking" where the camera dudes figure out their plan for filming, while the band plays the song a few times. Later we had lunch at the NBC Commissary, and we met a bunch of fans who were there waiting for the show. Then came the "downtime" part. Shaving occured, plus exciting e-mail reading. Foolishness went down hard. Bad songs were sung. Finally the show was taped, and we saw Antonio Banderas on our little TV. It was hard to watch because he was so handsome that we were all getting inferiority complexes. Then the nervous looking people came and told the band that it was time. Down they went. There was no place for me to take pictures, plus I was already in trouble for taking some during soundcheck (the cameramen's union strictly forbids any other camera operating on their soundstage, something I accidentally kept forgetting until a guy yelled at me.) So I photographed the TV.

...they told us that it was likely that the guys would get a short interview with Jay at the end, and a guy even talked with the band about what "material" they would be discussing with Jay (it was agreed upon that the "Jaywalking" co-incidence was top priority, as well as the fans (i.e. you guys), and funny stories from flying in business class.) But after they finished with "Island", Jay immediately ran up and told the audience goodnight, so apparently they had indeed ran out of time. Dang it! 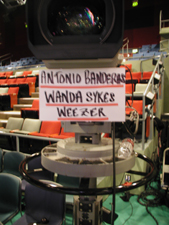 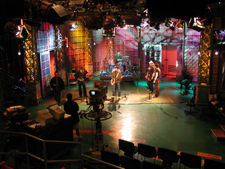 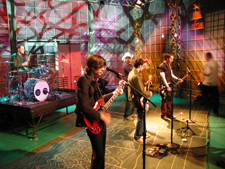 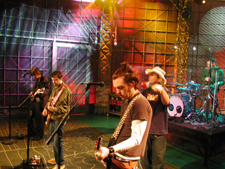 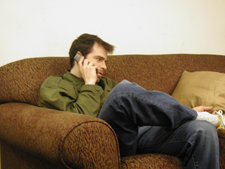 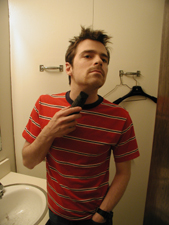 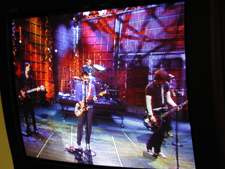 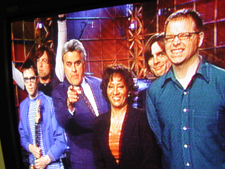 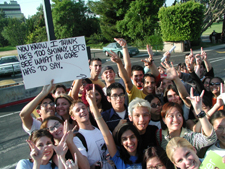