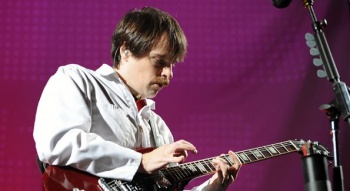 As frontman for Weezer, Rivers Cuomo soundtracked the nation's middle-school parties with alt-radio hits like "Buddy Holly," and single-handedly unearthed an emo nation with 1996's Pinkerton. A nervous five-year hiatus ensued; when Weezer finally returned with 2001's Green Album, it was greeted by endless complaints that the new Weezer was never as good as it had been. These last two years have seen the release of Cuomo's demos, home recordings, and various oddities as Alone and Alone II, which feature lengthy, freakishly enlightening liner-notes-cum-essays. From his home in L.A., Cuomo recently spoke to The A.V. Club about the almost universally acclaimed Alone albums, how Weezer emerged from metal power fantasies, and why constant criticism doesn't bother him.

A.V. Club: The last two Weezer albums were torn apart critically, but the Alone albums have been really well-received —- according to some people, because it's older material. Does that give you cognitive dissonance, or bother you at all?

Rivers: I mean, it's all me. From '92 to 2007, it's the best of my songs that didn't make the Weezer records for one reason or another, and I'm just as proud of them as I am of "The Greatest Man That Ever Lived" or "Pork And Beans" or anything on any Weezer record.

AVC: Pinkerton's reception seemed to annoy you at the time. Does that kind of thing still bother you?

Rivers: No. That was a very difficult experience, because I think once you live through something like that and you can continue making albums, you're pretty much good for the rest of your life.

AVC: Has it been a retroactive validation, how Pinkerton has become such a favorite?

Rivers: I guess I don't think about it too much. I do want to make music that people love, but I also want to make music that I love. I know I can't please everyone with anything I do, so I don't think too much about how other people are going to take things. Now, if no one was interested in the Alone records, I'd stop putting them out, but the first one — I know a lot of people really enjoyed it. So as long as I keep getting reception like that, I'll continue.

AVC: So you'll keep putting out the Alone albums if this one goes down equally well?

Rivers: Yeah, absolutely. I still have quite a lot of music left, maybe seven hours of working music, so I could keep putting out Alone albums as long as people want them. I certainly love the process of putting them together — listening to all the old songs and un-digging them, going through my old journals, figuring out what I was thinking at the time I was writing the songs, going through the old photographs, putting the whole thing together, and telling the story.

AVC: You seem to get a huge kick out of writing the liner notes. It's like some of the most extensive autobiography that's not an autobiography.

Rivers: [Laughs.] Yeah and that's disproportionate to how much people enjoy reading them, but I do very much enjoy looking at the big picture, looking back on the last 16 years and seeing all the ups and downs and the hilarious moves I've made, including my hair on the cover of Alone II. [Laughs.] And it's really feeling the sincerity of everything I've done, how I get so into things and then that passes and I'm on to something else. And it's really great to have a record of the different experiments I've tried, even the stuff that's not right for Weezer. Now it has a home, and now it has a place to come out.

AVC: You talk in the notes about when you were interested in working with classical music for a while, and then you didn't like the atonal direction of the Harvard Music Department. Is that something you ever came back to?

Rivers: I got really into studying classical music again in 2004, 2005. Actually, Brian [Bell, Weezer rhythm guitarist] also, we took private composition lessons with a professor at UCLA, Bruce Reich, and at that time, he explained a lot of 20th-century classical music to me, Stravinsky, and even crazier stuff like Boulez and Schoenberg. And I really started to enjoy it at that point. But mainly I've studied a lot of counterpoint, and a lot of analysis of the form. Some of those studies were a direct inspiration for "The Greatest Man That Ever Lived" on the Red Album. That song had some deep variations on the form that I studied with Bruce. One of those variations was done in the focal counterpoint style that I did with Bruce. I was so excited to show him the album once we were done. I sent it to him with a note that said, "Hey listen, I think you can hear your influence on here." Some of the passages were actually taken from homework assignments that I wrote for him. I was very sad to learn that he had died recently, and he never got to hear his influence on the Weezer record.

AVC: You aren't afraid to get into the technicals of songwriting and how you studied chord progressions. You talked a lot about studying the chord progressions of Beach Boys songs, but not so much about where, if anywhere, you felt you were getting any lyrical templates to follow.

Rivers: I didn't mention that? Well, certainly the Beach Boys and the early Beatles records were a huge influence on me lyrically. I had been coming from a background of listening to heavy metal, and my way out of metal was through the Pixies, Jane's Addiction, and Sonic Youth. A lot of those lyrics were intentionally abstract and artsy. They didn't necessarily make a lot of sense. They aren't pop lyrics. Then I heard lyrics like in "Don't Worry Baby," where Brian Wilson—in very simple terms, like what a 16-year old would write — is writing about a girl, or bragging about his car to his friends. It sounded so refreshing to me. I think you can hear that feeling of innocence and youthfulness in the lyrics I wrote at that time, like on "Buddy Holly" or "Holiday" or "Surf Wax America." That is very much influenced by The Beatles and the Beach Boys.

AVC: Chuck Eddy said he thought Weezer was as much a metal band as any metal band. It always seemed like you guys had your guitars recorded in a metal way.

Rivers: I think there is a very subtle shift from the metal I grew up on to Weezer. I think the big shift was from a minor key to a major key. That made a huge difference in how it was perceived. Lyrically, we're not talking about fantasy stuff like Dungeons & Dragons so much, although there is a D&D reference on the Blue Album. It's coming, I guess, not from a place of power and fantasy, but rather an acknowledgment of, "Oh, I don't actually have a lot of power. I am a geek." Whereas metal is trying to pretend you are not a geek.

AVC: What are you listening to these days?

Rivers: Ah, I'm not really listening to much these days. I go through these phases where I get really into music, and then not. Right now, I'm not listening to much. [Long pause.] Let's see. I just really got into this song I remember from high school, "Anything For You" by Gloria Estefan. It is such a beautiful song, and her voice just really touches me. There's a Lionel Richie song I've been grooving on recently. I can't remember the name of it — but yeah, pop ballads.

AVC: Do you still have the Excel spreadsheet that keeps track of your catalog?

Rivers: Yeah, I have an Excel spreadsheet called The Grand File. There are a large number of fields: the date, my location, my schedule, what I was doing that day, whatever song I may have written, whatever method I used, and then some journal notes on the day. This goes all the way back to five years before I was born up until 2003. Whenever I find any scrap of information from my past, I've been putting it in here.

AVC: That must be incredibly massive and useful when you're putting together the liner notes.

AVC: What are you working on with that?

Rivers: I'm working on two different books at once. The first one covers the period from 1992 to mid-1994. Right now, I'm just going back and interviewing people and taking lots of notes. I'm just starting to flesh it all out. The other one covers the first 18 years of my life. That's mostly a labor of love. I don't know how many people would be interested in that. It is still mostly in the interview stage, talking to old friends and family and seeing what they remember.

AVC: Is that your primary interest right now?

Rivers: No. My primary responsibility besides my family is working with Weezer. That pretty much sets my schedule. Book-wise, I just kind of work around that, and it's the same thing with Alone. These retrospective projects are mostly just labors of love, and I fit them in when I can. Still, though, there is a lot of time in each day. I'm awake 16 to 17 hours, so I find I'm able to get a lot done.

AVC: On the Hootenanny Tour, it seems like you're stepping back and letting other people sing on the song, and making it more of a collaborative effort. Are you trying to be less prominent as a frontman?

Rivers: Mainly I'm just trying to make it interesting for myself. That's the motivation for doing the Hootenanny. Our manager said, "All right, Weezer, it's time to do another run of these radio-station promo events where you gotta play for the radio winners." It just felt like more fun to do Hootenanny, where the radio winners actually bring instruments, and we all jam together. I don't find that there is less responsibility on me, because now I have this army of 300 crazed musicians who I have to corral and help make music with. It's actually a lot of responsibility, but it's fun stuff. I think if I wasn't a musician, I would be a high-school band director or orchestra director. I like working with large groups of musicians and bringing out the dynamics and accomplishing something as a team.

AVC: Has it made touring easier?

Rivers: Easy is not a word I would ever use to describe touring. I would say this last music tour was the most rewarding and the most fun and the most exciting Weezer tour I have ever been a part of.