From Weezerpedia
(Redirected from Beatles)
Jump to: navigation, search 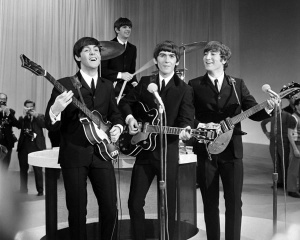 The Beatles were not so much a popular rock/pop group as they were quite possibly the most significant pop culture phenomenon of the twentieth century. Like many artists, Weezer cites The Beatles as a primary influence.

Aged sixteen, singer and guitarist John Lennon formed the skiffle group The Quarrymen with some Liverpool schoolfriends in March 1957. Fifteen-year-old Paul McCartney joined as a guitarist after he and Lennon met that July. When McCartney in turn invited George Harrison to watch the group the following February, the fourteen-year-old joined as lead guitarist. By 1960 Lennon's schoolfriends had left the group, so Lennon's friend, Stuart Sutcliffe, joined as bassist. He suggested changing the band name to "The Beetles" as a tribute to Buddy Holly and The Crickets, and they became "The Beatles" after Lennon suggested the pun. They made enough of a noise to cause the British labels to come calling, and the band signed to EMI Records in the early 1962. With Stuart Sutcliffe's death in April 1962, Paul McCartney moved to bass and Pete Best was replaced by Ringo Starr at the behest of producer George Martin, effectively solidifying the classic lineup.

Beginning with 1963's Please Please Me, The Beatles proceeded to release a solid string of singles and albums, each one surpassing the last in quality and popularity. During their eight short years of recording activity, the band created a catalog of what many people consider some of the most important recordings ever made. Although The Beatles did their share of cover songs early on, they were one of the first acts to write and perform their own material, which began to change the way the popular music industry worked.

Before long, The Beatles caught on in America, and, in turn, the rest of the world, with the public's feverish interest in the group spawning the term 'Beatlemania'. Aside from being accomplished musicians, the members of the band were charming and photogenic young men who never shied away from the spotlight, and managed to star in two feature films, a TV special, were the subject of a documentary film, and inspired an animated feature and tv series.

The Beatles came to an eventual end in 1970. Inner-group frictions and artistic differences did the band in, and each member went on to solo careers of varying success. However, the original group left behind a musical legacy that is still enthralling listeners, and inspiring new musicians, to this very day.