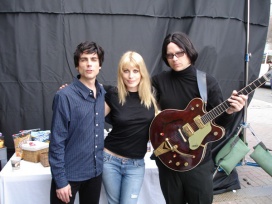 ...thats right, proud papa/weez stick man Pat racks up another one. Congrats and have some fun!

Large size picture link: here. This is another shot by Nathan Parker at the 1/9/06 'Factory Girl' movie shoot in Shreveport, LA. Between Brian as Lou Reed and B-Day boy Pat as John Cale, we see Meredith Ostrum in her role as Nico.

..'Perfect Situation' is #1 on the Modern Rock chart for the third week in a row! And speaking of charts ...#1, baby! Looks like the #3 Bev Hills digital song ranking from Rolling Stone counted various remix versions of the Hollaback and Kanye songs. When you go by just the 'single' versions, Beverly Hills had 2005 on digital lockdown!

...Hey, if you buy anything at Best Buy, whether online or in person, between now and 2/11/06, you get a free Weezer DVD which contains 3 live Weezer performances from the AOL Sessions. Check it out!

...Heres a cool interview with Scott over at The Toledo Blade from 12/28. Sorry for the lateness on this one, the info was misplaced until now. Speaking of interviews, there should be some from Rivers soon - keep an eye on The New York Times for now.

...clarification, as some are still asking: The 'radio/single/remixed/new' version of 'Perfect Situation' that you hear in the video and (most likely) on radio stations - but what is NOT on the first million or so copies of the 'Make Believe' CD, is the version you get when you buy the track online at iTunes etc. This includes if you buy Make Believe as a full digital album on iTunes as well - your 'digital album' has the new version. This version is unavailable on retail CD, until 'Make Believe' goes into a new pressing, which actually hould be happening right about now come to think of it.

*UPDATE* thanks to helpful iTunes user/weez fan Justin: "...there is a difference between the the version in the video and the version you buy from iTunes. The "new" iTunes version still has the FULL guitar intro while the video has the guitar intro cut short. But both feature the new chorus. I imagine you'll send a lot of people into a frenzy if they think the new album version features the shortened solo!"
...Sorry about that folks, he's right. The only place you get the short intro is in the video.

...Weez gear heads clamoring for gear updates (sorry! workin' on it!) should check out this Rivers interview on Guitar.com from last fall. I think it slipped thru the cracks, and it includes a bit of fresh gear info here and there. (hat tip: Becca B.)