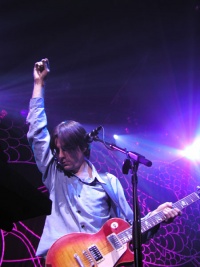 On July 21, 2005 Weezer performed in Nashville, TN at the Municipal Auditorium on their tour in support of Make Believe. The opening acts were The Fray and Ben Folds.

We rolled over from hotel and immediately recognized the Municipal Auditorium from 2/21/02, the Hyper Extended Midget Tour. On that day, high fevers were flaring up for both Pat and Rivers, who managed to pull it together just enough to deliver the rock show. Today, by contrast, was far healthier, with everyone in tip top shape. The only high temperature being recorded was outside, in the air! Inside there was a nice AC system pumping, though the sheer mass of bodies in the crowd kinda cancelled that right out by showtime. 3 years ago, the aforementioned illnesses prevented what could have been a 3rd 'challenge', after the very sucessful Cobo Challenge and KC Muni Challenges that were filmed, starring Pat luge-boarding down the pedestrian ramps. Today, the excuse was the inability to locate a skateboard! Thats right, the only board on tour at the moment is owned by one of the lighting guys, and we couldnt find him in time to rip it up before they let the peeps in. Ah well. Theres always another architecturally skateboard friendly auditorium down the road somewhere...

3 years ago, the opening acts were Ozma and Saves The Day. Today, we had another nice dose of The Fray, and then the first of 2 nights with Ben Folds, who weezer has never had the pleasure of sharing a bill with before, aside from a possible festival here and there over the years. Ben + co. started their set off with a cool cover of the The Cure's "In Between Days", and later did a cool sing along, 'conducting' the crowd with his arms (and a few choice hand signals to those who wouldnt cooperate!) He finished his set with a trademark piano stool bashing, leaving the stage for weezer to do their thang. Weezer continued what has become since about Montreal a vey consistent and energetic set, firing on all cylanders. Another hot 'Why Bother' with Brian on lead vox, another killer 'Fall Together' from Scott, another set of rock shapes pulled to the stoke of the crowd, another Perfect Situation sing along, another rad Beverly Hills extended solo breakdown. In short: get 'er done!

Pat says of tonights show: "I played like Terry Bozzio, my new mentor, and to all the naysayers, i say, yea, in order to negate your nay. Thereby, eternally, preserving the natural order. Plus the foccacia is fantastic tonight."