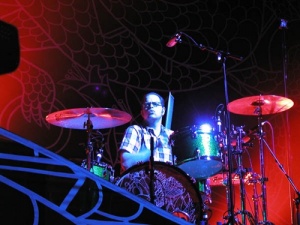 On July 13, 2005 Weezer performed in Uniondale, NY at the Nassau Coliseum on their tour in support of Make Believe. The opening bands were The Fray and Taking Back Sunday.


...MB '05 Tour: Day 51: Uniondale, NY - Nassau Coliseum
We rolled up to the Nassau Coliseum late the night before the show, in from Maine, and checked into the amazingly convienient and oddly nautically themed hotel right next door. Come lunchtime we headed over to the venerable Coliseum, home of the New York Islanders, who like all NHL teams havent been too active of late. The mood around the arena was chipper however, as the news of the just-signed players agreement spread like wildfire amongst the local hockey faithful. Meanwhile three bands got to work.

The Fray delivered another solid set after giving weezer a beautiful hand carved 'thank you banana' (?!?). Then Taking Back Sunday took the stage and went bananas, eliciting a crazed reaction from the crowd and raising the energy level in the room to 'nuts'. Weezer picked right up where last night left off, with an animated and lively set filled with great vibes. 'No One Else' returned to the set tonight after a prolonged absence, in the encore. Recent shows have also included "My Name Is Jonas", which had been a.w.o.l. for awhile as well.

Tonight saw the completeion of the set pieces, with the giant 'dragon' now slithering across the stage and the mysterious 'floating' lights in place. Looking sweet!

Props to the JONAS member + his friend who drove 29 hours from Kansas City to make the show because they couldnt get tickets to last week's Buzz Beach Ball. After all that driving, they got to Uniondale at the crack of dawn today and got to stand front row center by the barricade! Hope they had a great show.

Also a collective shout out to the gang at the soundboard area post show. You guys rock!

And props to Scott for calling on people near the front of the crowd to chill out a bit after a girl in the front row was injured by a crowd surfer. The girl was led to the EMTs for treatment and we were unable to figure out who it was or if she had to go or got to stay for the rest of the show. She was in pain from a cut and was very frightened, so our hearts go out to her and hope she recovered quickly. If anyone has any info about this incident, let us know on the comment page.