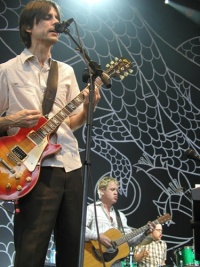 On July 9, 2005 Weezer performed in Toronto, ON, Canada, at the Molson Ampitheater on their tour in support of Make Believe. This was the second of 3 co-headlining shows with The Pixies. The opening band was The Fray.

...MB '05 Tour: Day 47: Toronto, Canada - Molson Ampitheater
The Molson Ampitheater is one of the nicest ampitheaters in North America, located right on the lake shore of Lake Ontario in the waterfront park area. Today was a particularly nice day, and a busy day in Toronto, with a major Gran Prix race qualifying session going on all day right next to the Ampitheater grounds on the closed off Lake Shore Drive. A stellar summer day for rock.

The Milwaukee, Toronto, and Montreal shows are co-headlining shows. Weezer and The Pixies each play for the exact same amount of time, and are swapping out the final set time. So for Toronto, the Pixies played last. Some wrote in complaining about some misleading local advertising that implied that Weezer was on last tonight. While we dont know much about that aspect of things, we still extend our apologies to anyone who missed some of Weezer's set. Now, The Pixies do manage to stuff in several more songs in their settime, as their songs are noticeably shorter on average and they pretty much blast thru their set Ramones-style. But believe it or not, the set times are the same.

Both weezer and The Pixies delivered the rock with a firm and steady hand tonight, delivering tight sets. Though there was an odd kinda sleepy vibe in the air it seemed, probably having to do with the almost too-perfect summer day. Things got of to a sunny hazy start, and the peeps in the audience took a while to get in the groove, but they did make some noise for the weez. But with the temperatures and humidity being what they were, who can blame a guy for just chilling and enjoying the show? When the sun went below the horizon late in weezer's set, the place started to really liven up, and the welcome for the Pixies was warm indeed. Post show, there was a major fireworks display on the nearby waterfront, as tonights various events capped off a week of summer celebrations in Toronto. Then came the traffic jam part of the celebration, and we started the overnight drive up to Montreal in the midst of about 70 thousand waterfront-exiting cars.

I just woke up after my lovely evening last night with our favorite quartert. I think some higher force was trying to keep me from coming to the show but I'm certainly glad that I beat the odds. First I didn't have any cash to buy a ticket so my friends who couldn't imagine me missing a weezer show bought my ticket for me. Then this week I spent two nights in the hospital having an emergency appendectomy as my appendix didn't seem to appreciate me eating some caesar dressing that was a year expired but I gathered up all my strength and T3 and made the trek from the burbs to the lakeshore. I was not dissapointed. Perfect Situation, El Scorcho, instrumental Death & Destruction, Rivers having fun during the Beverly Hills solo, just an overall solid set. And then we all got treated to one absolutley amazing performance by the Pixies. I am a Pixies fan and this was my first time seeing them and I was blown away. Let me tell ya, Black Francis certainly has some kind of energy and stage presence and Kim Deal's voice is just incredible. Overall evening: A+ ---Jon R

I just got back from the Toronto show, and I must say it was *yet again* AMAZING!!!! I really wish they would've come on last though, so we could have some Flying =W= action and some more songs, but it's OK because the Pixies were very good. Brian rocked on Getchoo, Rivers did some nice shredding, Scott's shirt was wicked, and Pat rocked out with perhaps the MOST passion I have ever seen him with. I'm so glad the Pixies played Velouria because I love Weezer's cover of that song...A bad highlight of the night was getting groped by 3 young girls that seemed to be from another planet (literally - piercings everywhere, tatoos, and drunk out of their minds) which is the only reason it could've explained their behaviour. ------Rocky M