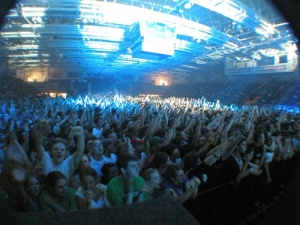 On July 12, 2005 Weezer performed in Lewiston, ME at The Colisee on their tour in support of Make Believe. The opening act was The Fray.

...MB '05 Tour: Day 50: Lewiston, Maine - The Colisee
Lewiston - Auburn, Maine (a.k.a. "L/A" as it is referred to in signs around there) is a fairly remote small city/big town set in the natural splendour of Maine's raging rivers and cool forests. So it was a suprise to learn that its also apparently the crack capital of Maine. While the idyllic small town vibe was intact everywhere we went, a walk around the neighbrohoods surrounding the Colisee confirmed that there was more than meets the eye going on. But gold chain wearing shady types aside, it was a beautiful day in a pleasent small town. Which needed to rock tonight! Weezer and The Fray came prepared.

The Fray got things started with a longer set than they've had to date on the tour, due to their being the one and only opening act tonight. They did a great job and we got to hear more of their mellow, rocking Travis/Coldply-ish sound, which included a cool cover of the Beatles "Come Together".

The Weezer set was stellar tonight. They were tight, the crowd went ballistic, and there were some nice touches, such as when Rivers led the crowd on an extended "whoah oh" Perfect Situation sing along with the whole crowd participating acapella. The 'Beverly Hills' extended guitar solo breakdown continues to evolve and slay the dragon every night. Scott's newfound lead vocal powers on "Fall Together" continue to kick ass. And the mood was just generally confident and jubilant onstage.

Rivers dedicated the last song of the set, "Hash Pipe", to Mikey, and suprised the crowd by saying Mikey had come down to visit and was watching the show. Rivers invited him to come down and Mikey was really stoked to come say hi and see the old gang again (and the new gang - Scott gave him a very warm welcome.) Mikey, the bass player in weezer from 1998-2001, has moved on since those days, recovering from a dark period in his life with a successful art career, living up in Vermont with his wife and stepson, and says he never touches musical instruments anymore, preferring the visual medium entirely.

Before the show, Scott did a live interview via cell phone on WCYY Lewiston/Auburn

What a show this was!!! I drove from New York to see them feeling that Weezer playing just twenty miles or so from my home town of Gray would be the ultimate show and it did not disappoint. I also saw the guys at Roseland and let me say that be a New Yorker for 10 years the Maine fans kicked New York's ass!!! Rivers especially looked like he was having a blast. The 3 doors down comment was hysterical. and the dedication to Mikey was poignant. Honestly, and I know most people say this, but this was the most fun I've had at a concert ever! My plan is to drive back to New York tomorrow and see them in Long Island. You know, give the New Yorkers a second chance to redeem themselves. Thank you Weezer!!! ---Paul Y.

I just got home from the show in Lewiston and it was the most amazing show I'd ever seen. The Weez were perfect and full of energy. Rivers was incredibly social tonight and it made for a terrific show all around. I live in New Brunswick, Canada and I was traveling with three of my friends, we drove down and made the show just in time and were driving home that night. Just outside of the Canadian border at about 4am I noticed the brakes were feeling a bit funny on my car and so i pulled over to the side of the road to notice a pile of smoke coming from the back. I got out of the car and we saw flames bursting out from the rear passenger tire(right beside the gas tank) and we all start to panic of course. We got a few water bottles out from the car and started dousing the flames, but they weren't giiving out, and then we started piling sand on top pf the flames as frantically as possible until finally the fire was out. The tire was smoldering and smoke filled the car. We were in a very small town and it was impossible to find any help at this time in the morning, we finally found the number of a towing service and we called. They said they'd be a little while and showed up at around 6:30 am as we were trying to sleep in the car with no luck. The car got towed and we ended up spending one of the most boring days of my life circling around this town until they managed to fix the car. We're all home now, I've been up for thirty three hours straight, I'm as dirty as I've ever been, covered in sweat, dirt and grease, and the car repairs cost $547.00. In total the four of us spent a little over a thousand dollars combined to see weezer, and we all still agree that it was more then worth every penny of it. Thanks for the great show Weezer, and the great story to tell our friends. Now I'm going to sleep. ---Paul L.