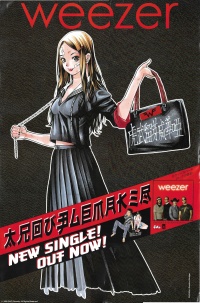 The EP was released in October of 2008 on CD as well as translucent red 12"-vinyl. The release features two tracks by Canadian DJ Richard Vission of the label Solmatic. An additional remix, labeled "Richard Vission Solmatic Remix" is currently in circulation online, but does not appear on the EP. The EP's cover features an illustration by Manabu Akishige, who previously wrote and illustrated the manga Go-On!, wherein Weezer's debut album is featured in the plot. The characters from Go-On! also appeared on a Japanese promotional poster for Weezer's Red Album. The illustrations featured on the packaging for Troublemaker Remixes were reused for a Mexican CD release of the greatest hits compilation Six Hits.