Not to be confused with Christmas with Weezer.

The Christmas CD, later re-released as Winter Weezerland, is a two-song promotional EP of original Christmas songs released by Weezer in late 2000.

The Christmas CD was recorded in November 2000 at Rivers Cuomo's home studio, dubbed "Mocha Fusion Studios", with additional work done later at Cello Studios (shortly before the band recorded The Green Album at the same studio). The first track, "The Christmas Song", was originally recorded for inclusion on the annual KROQ Christmas compilation album Kevin and Bean: The Real Slim Santa, and was edited and partially re-recorded (at Ric Ocasek's urging)[citation needed] for its inclusion on the EP. According to a history of the CD written by Karl Koch in 2014, the promo was released by Geffen in an attempt to capitalize on potential interest in the song around the country which would not have been reached solely through its inclusion on the regional Los Angeles KROQ release. Koch additionally mentions that the EP served as promotion for the band's upcoming album, which would come out only a few months later.[1]

The CD was sent to radio stations in December, with fan reports on Karl's Corner indicating that it began receiving airplay around December 7.[2] Additionally, approximately 1000 copies were sent to members of the original Weezer Fan Club.[1][Note 1] The songs were uploaded as MP3s onto the short-lived "W.F.O." section on weezer.net around the time of the promo's release, and later onto the A/V section of weezer.com around December 2003.[3][4] January 1, 2001 is considered to be "official" release date of the CD.[1]

In 2005, the tracks were released for sale through the iTunes music store with the new title Winter Weezerland and unique album art. Fan accounts indicate the release received some backlash due to the fact that the songs were previously available for free on the Weezer website.[5] An email proportedly sent to a fan by Karl Koch, and which was quoted in an earlier version of the Wikipedia article for the Christmas CD, states that the re-release was done under the direction of Geffen without any input from the band. The EP was removed from iTunes by 2008.[5] 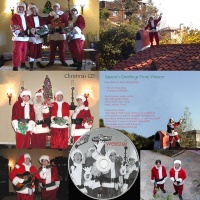 A collage featuring the CD's artwork, as well as other photos taken for potential usage.

In a post on the Weezer Facebook page which recounts the history of the Christmas CD, Koch provides a story about the art's history:

The cover art for Winter Weezerland utilizes the same photo originally featured on the back of the Christmas CD. It appears to have been photoshopped to remove the original text, and is slightly zoomed in.